It was a good old fashioned power rock out at the Biltmore last Saturday night when Lullabye Arkestra and Pierced Arrows blasted their way through an evening that left nobody in the dark about how gritty hard music ought to be played. This night was a taste of the old school hardened veterans mixing with the scrappy up and comers and the uniting of the two bands on one bill was awesome.

We arrived just in time for Toronto’s Lullabye Arkestra. Bathed in fog and a couple of simple flood lights, Kat Taylor and Justin Small stood poised, ready to rearrange faces with their hugely powerful blues thrash love songs. Taylor plays bass and screams, bellows, wails and sings while Small slays on the kit. Together they make a lot of glorious noise that stands mightily alongside some of the heaviest’s best. Let’s just say that a duo who can lay down a convincing death metal cover is impressive to say the least. Playing a few off the new album including “We Fuck the Night,” which is one of their best, and in a moment of touching upon new levels of bad-ass, Small lit his snare on fire while still playing. They thrashed, they blasted, they ruled!

After hearing so much of Pierced Arrows’ history as some of the purveyors of early garage punk, it was good to finally see the Portland band doing what they do best. Playing their last show on this leg of the tour, Pierced Arrows were loose and clearly having a great time up there. The house was near capacity and the feeling in the air was electric as the Arrows ripped through a good-sized set list, rarely slowing down or pausing to catch a breath, proving that rock doesn’t leaves your bones once you pass 50. Indeed, some music is just too tough to die. But why would anyone want it to? Hail hail rock and roll! 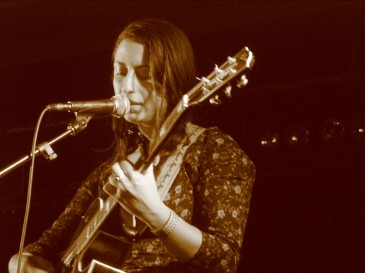