“Show begins at 8 p.m. Over at 11 p.m.” Rarely does a show’s description read so true. They say Mussolini made the trains run on time. Well, Little Mountain Gallery must be run by Mussolini. Unfortunately, due to this unexpected promptness this humble reviewer missed Dirty Beaches, but was told by another attendee that they were “pretty dope.” Shawn Mrazek, following this dope performance, took to the floor rather than the stage, surrounding himself in a tight throng of bobbing heads and appreciation. Listening to Shawn Mrazek play alone with nothing but his guitar and voice, one feels immersed by his yearning, honest lyrics and simple chords. Shawn Mrazek is not one for flair and his simplistic style strips him of the pretension of musician, allowing you to listen directly to his songs without the burden of flamboyant showmanship. [ed. Discorder would like to add our congratulations to Shawn Mrazek on the birth of his son Otis, who was born shortly before this show.]

When I returned from a brief smoke break, a thick crowd seemed to have magically appeared, filling the small room to capacity. The scent of anticipation for the night’s headliners was thick in the air. The show consisted mainly of songs from their new LP, Mount Benson, interspersed with a generous serving of crowd favourites. Despite a few difficulties and false starts, the band put on a truly memorable display complete with crowd surfing, guest lectures pertaining to the old western frontier and a costume contest culminating in a shirtless wrestling match between the singer, Adrian Teacher and a few eager moshers. And just as quickly as the night started, the clock struck 11 p.m. Suddenly the music stopped and the crowd was hurriedly rushed into the crisp spring night, giddy with the vibes of an awesome concert. 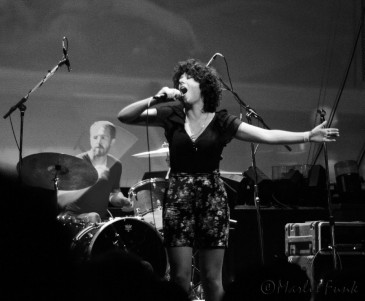