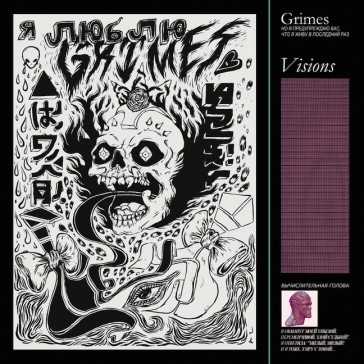 Grimes, a.k.a. the Vancouver-raised, Claire Boucher, has been getting lots of hype in the press, and deservedly so. Visions is one of those game-changing albums that will have untold influence on everything relevant that comes afterward. In an interview, Boucher has stated her desire to fuse the pop star and the producer, and Visions is the proof in the pudding that she has succeeded. You need to see a video of her performing to really grasp what is going on; the way she juggles sequencing, playing the synth, and looping her ethereal vocals is truly awesome.

The beats are groovy and complex, combining elements of dancehall, hip-hop, house and other bass-centric styles. But it is Boucher’s growing mastery of her own voice that really makes Visions shine with such sonic brilliance. This album has a shape-shifting versatility that makes it equally appropriate for an all-night rave as for tripping out on the couch with your headphones on and the lights off.

Unlike many artists who seem to transparently create for the sole purpose of being praised by others, Boucher’s work feels internal and transformative, even—dare I say—spiritual. This music is the diamond fruit of the soul, both an offering and an invitation. Visions is not looking for attention, it’s more like the desire to share awareness of something precious and ephemeral, like having a stranger approach you on the street and point out a beautiful rainbow you hadn’t noticed the moment just before it fades away.