“btw ‘steady drip of a broken spout’ comes from a song i wrote for my solo project. it’s abt not speaking so good. […] in case that’s of any interest.” [sic] Ethan Reyes, the guitarist and lead vocalist of Oblomov, texted me a few hours after we got off the phone, “most of my lyrics have something to do with getting tripped up on wordz” [sic].

Oblomov is Vancouver’s premier emo-punk outfit, made up of Ethan, Colin Osler on bass and vocals, and Darren Mountain drumming. In a scene practically drowning in alternative punk rock love songs with the occasional glimmer of delightful or dancey pop, Oblomov is a jagged gasp of fresh air, managing a delicate balance between melodic riffs, playful rhythm, and heavy, sometimes sludgy, vocals. Their debut album, Steady Drip of a Broken Spout, was posted on their Bandcamp in late April with little to no fanfare.

Ethan, Colin, and Darren are all their own brand of Red Gate-scene darlings, sharing members with Kamikaze Nurse, Snail Gun, Pudding, Bedwetters Anonymous, and a handful of other projects between them. The lineup went through a couple iterations – briefly featuring Nir AvGay and Mike Therrien from local projects like Megamall, Security Guard, and Champion Lawnmower – before settling on the current members. But this project is a sort of first for all of them; with Colin and Darren having never played their instruments in a band before and Ethan taking on songwriting. “The main difference [for me] is that I write the songs, because I don’t do that in any of my other bands,” Ethan explained. “I take more of a role of a director but I really trust their instincts because they’re also talented musicians.” “[The songs] just happen out of pure genius,” Darren joked. Laughing, Colin expanded on the process, “Most of the time they happen out of pure genius and then Darren and I add our parts. Ethan never really tells us what to play. He just says, ‘Make something go woosh-woosh here.’ When he showed us the slow-core song “Never Had” he was like, ‘I want you guys to go beast mode.’ and then we met up for band practice and he was like, ‘OK, go for it.’” 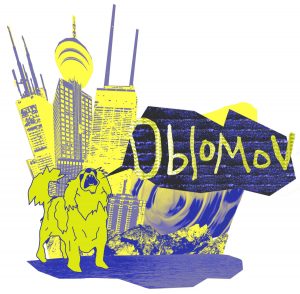 The dynamic works well, and it’s one that everyone is comfortable with. For Ethan, “Oblo[mov]’s good because these are my songs and they came from my brain. It’s kind of the ultimate way I can express myself. […] I don’t like being in the spotlight. [But] I do like being in it at the same time. I can also be a perfectionist in some ways, I like to maintain control when it’s my project. At the end of the day, I’m, like, living a double life where I don’t wanna’ be in the spotlight but I also don’t want to give it up.” And both Colin and Darren prefer to play supportive roles with Ethan at the center of the project. “It makes it more low pressure,” Darren added, “especially because, usually, if there’s one person coming to the rest of the band with a song, it’s because they want it.”

Oblomov’s sound is distinct from a lot of the bands they’re typically billed with, leaning less on more traditional, high energy punk. “I think it definitely comes a lot from what I listen to,” with Ethan at the helm of the songwriting process, his influences drive the band’s sound. “I’m super into the 90s emo, post-hardcore kind of stuff which is all about those dynamics of soft melodic stuff and then breaking into heavier parts. Bands like Happy Diving and Weed and stuff were big for me a couple years ago. […] Don’t call us emo because – I don’t know what we are. Every song is different. Every song has different influences.” But all three of them have similar musical interests, “They’re the boys. They’re my buddies and we grew up having the same experiences with pop culture and stuff,” Ethan explained. “I do wish the album could have been a bit more cohesive. […] Even though I love all the songs, they’re so weirdly different.”

Another reason Oblomov stands out is that it’s members are three cis men which, thankfully, has become a rarity in Vancouver’s DIY music community. When asked, Colin and Darren had a really great exchange about the band’s responsibility to that aspect of their makeup.

C: Obviously it’s something that I’m aware of, but I don’t think we should beat ourselves up for it.

D: It’s something we take into account when being asked to play shows and we gauge who the other bands are.

D: [laugh] Yeah, that would be pretty embarrassing to be a part of.

D: Because there’s a difference between starting a band with your friends […] and being like, ‘We need to get someone involved who is not a dude.’

C: And still being shitty people. There’s lot of other ways to confront that aspect and I feel like with a lot of bands now, it’s very symptomatic of people solving problems in outrage. It’s immediate and directly reacting to it instead of in other ways like, ‘We could improve ourselves as people.’

D: The overarching issue is not enough non-men being in the music scene.

C: Or being comfortable in the music scene.

D: And the obvious and easiest route to combat that, the most visible way to combat that, is by starting a band with people who aren’t dudes. But there are so many other ways you can encourage and contribute to that cause without doing that.

C: That’s exactly what I was trying to say. You said it better. Something I did think was really cool was when Nir was in the band, it was just three brown dudes and I was like, ‘That’s kind of rare.’ 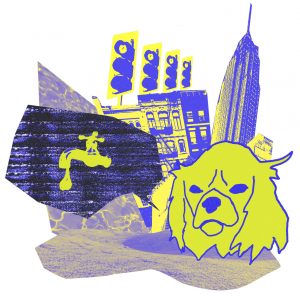 Tokenism comes up a lot in the music scene, both in conversation and in practice, and there’s a lot of work that needs to be done to build spaces where all marginalized groups feel welcome, safe, and seen. And a lot of where that lies is in the individual participants’ attitudes and expectations. I’m not saying Oblomov has “solved tokenism”, and specifically gendered tokenism, at all. But refusing to play shows with all masc lineups and even just engaging in this conversation show a fundamental shift around how that gap can be meaningfully narrowed.

Despite the recency of their new album, Ethan’s already gearing up for the next one. “I think for the next album – I already have a bunch of songs written for it – it’s definitely gonna’ be more cohesive. [With different projects, it’s like] splitting your personality because a lot of the time it’s about the audience. I want the audience to focus on a certain thread that combines all of these songs and I might not want them to see all the other, crazier stuff. It’s a balancing act for sure.” Balance seems like an operative word in Oblomov’s musical tone, practice, and politics. And it’s something they seem to have a solid handle on.

Oblomov’s music more than speaks for itself and for a band whose lyrics are predominantly about miscommunication, the three of them speak on the project easily and with an obvious affection for each other. “I don’t want to play a band that’s not friends,” Colin explained, “that’s why I play music.” Oblomov is Ethan’s vision and while all the members believe in that vision, ultimately the band works because everyone wants to be there.