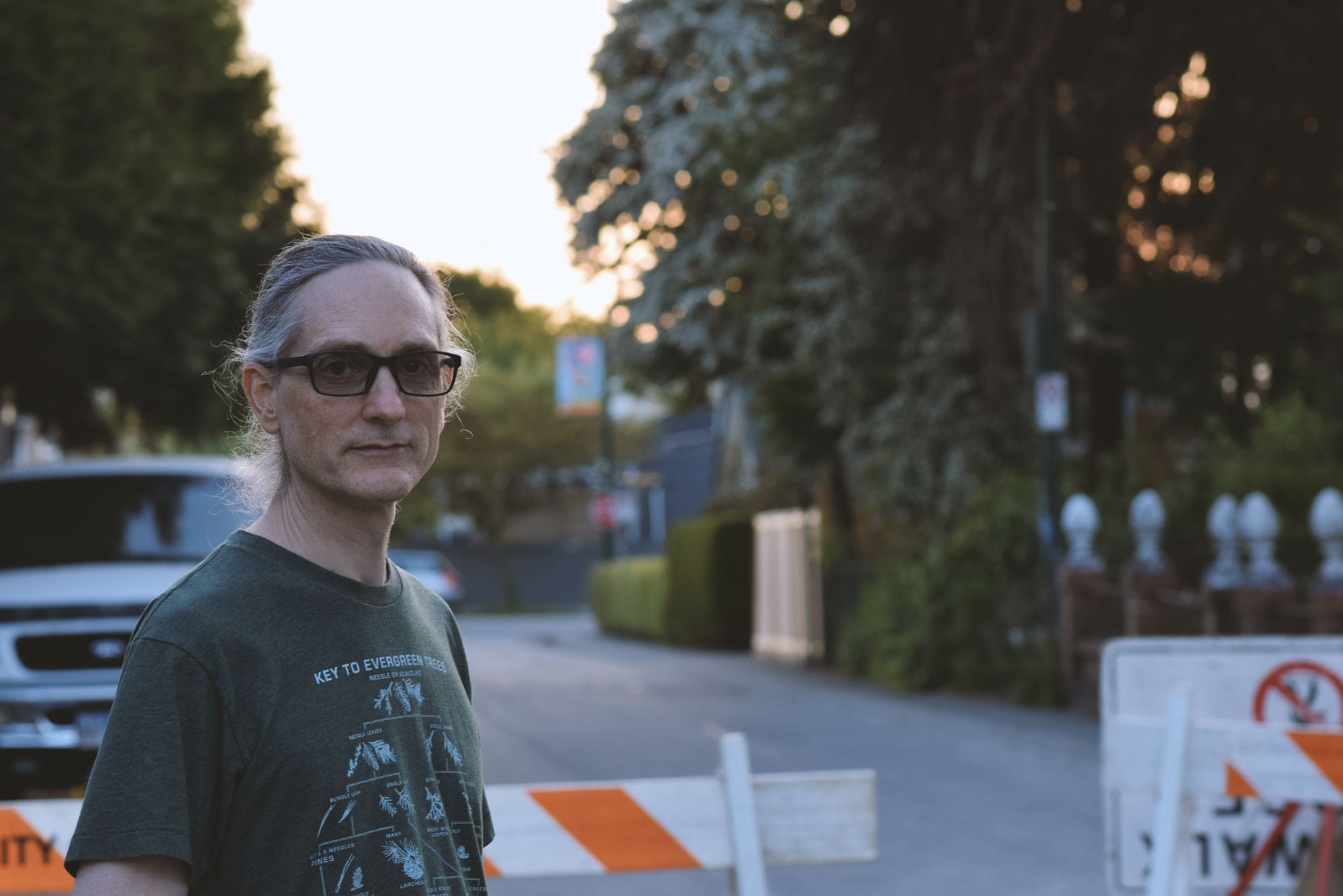 “I don’t know how my mind works this way.”

I’m chatting with Peter Courtemanche in 49th Parallel on Main Street, and he’s telling me about how he once turned a vine into an antenna, which he then used to stream the environment of a flowering tree filled with bees onto AM radio. Making an antenna out of a vine would be an impressive feat on its own, but Courtemanche didn’t stop there. Using an embedded processor the size of a toonie, the bee sounds were combined with “tones and sound artifacts from bio-electric synthesizer modules” that generated loud static noise from the plants they were broadcasted through.

“The result of that is you get all these weird artifacts and these strange noises in the radio, mixed with the bees,” he says.

Courtemanche calls this piece “Bio-Electric-Radio,” and it’s one of the many sound art pieces you’ll find on his radio show, The Absolute Value of Insomnia, which airs on Sunday mornings from 2–6AM. Given that time slot, it should be no surprise that the show is computer-run. However, the music is not a simple mix of pre-recorded songs — rather, it’s all live-produced through a random generator that Courtemanche created himself.

“I’ll record sounds from a particular place or around a particular theme, take the sounds from that and put them in a group in a folder somewhere, and [the generator will] write a little script that animates those sounds and mixes them all together,” he explains.

He estimates that the generator has around 60 to 70 scripts in it, and that each script plays through a select number of files that can vary from eight sounds to over 100.

“It moves through those in a fairly random way. It tries not to repeat itself too often, so it has a memory of what it has done and tries to figure out new ways of working with sounds.”

The result is a fascinating, meditative four hours of ambient soundscapes that bounces between peaceful bliss, uncompromising chaos and something in-between. A great variety of sounds pop up throughout an episode: static bursts, droning synthesizers, hovering woodwinds, computer glitch noises, faded vocal samples and all sorts of strange noises make muted but memorable appearances. They stay on for minutes at a time, but the generative nature of the program means that the music is slowly but constantly mutating.

Many of these sounds come from Courtemanche’s thirty-odd years of creating sound art through unconventional means. For instance, one of his signature instruments is a magnetic coil that can convert ELF (Extremely Low Frequency radiation) waves into a static drone that sounds as if it’s transmitting from inside a power plant. He has also created a number of field recordings, including one of Queen Elizabeth Park during a rainfall.

Plenty of the sounds on The Absolute Value of Insomnia also come from friends and collaborators that Courtemanche has worked with over the years. Peters says “about a quarter” of them were made by Bill Mullan, another sound artist who suggested the show concept for Peter and came up with the name. Other featured musicians include Anna Friz, Adam Sloan and Dinah Bird.

Courtemanche himself is a CiTR veteran. He has previously served as the station’s program director and engineer, and helped found the annual 24 Hours of Radio Art on January 17. From 1988 to 1992, his former show — The Absolute Value of Noise — broadcasted 2.5 hours worth of experimental music every Friday, with a half-hour break that made room for Nardwuar The Human Serviette’s show.

“[It was] literally the only time of day he could schedule the show,” says Courtemanche. “It was actually a really good way to do a show, to have a half-hour break in the middle where something semi-crazy is going on, which creates a lot of energy.”

Even if tuning in at 2AM isn’t going to be on everyone’s agenda, it’s hard not to be fascinated by the concept of Courtemanche’s show. It brings to mind an image of someone aimlessly fiddling with their radio dial late at night, stumbling across this program and being astounded by what they hear. According to Courtemanche, one listener he knows of had an experience similar to this.

“There was one person who seriously wanted to know exactly what [sound] had played in the middle of the show. They were bugging the station manager over and over and over, so I had to comb through the thing and try to figure out what had happened.”

The sound, as it turned out, was a recording of a NASA rocket launch that Mullan had put together.

“He edited them and put some effects on all the sounds,” explains Courtemanche. “It’s very eerie.”

However, there’s a certain appeal in the mystery behind what these sounds are and where they come from. The Absolute Value of Insomnia is filled with sounds both lovely and striking, but it’s the show’s unpredictable sequencing and ungraspable, alien nature that turns these compiled sounds into an otherworldly, transcendental experience. And it happens every week, broadcasting through the lonely air of the night while Vancouver lies fast asleep.

Tune in late Saturday / early Sunday from 2-6AM to hear The Absolute Value of Insomnia, or listen to show archives at citr.ca/radio/the-absolute-value-of-insomnia.