Synthcake launched their new EP Molding Through Seasons to an enthusiastic crowd at the Interurban Art Gallery on May 11. They turned the night into a full experience too, incorporating an exhibit of modern—maybe post modern—art by the duo Jorden Blue and David James Doody. The art complemented Synthcake’s own sense of style, but by the time they actually took the stage you had pretty much forgotten it was there. There was also stage lighting from an overhead projector shining through coloured transparencies and liquids onto the band and the wall behind them. The sheets and liquids were shuffled around and tuned in and out of focus; an interesting idea, but in practice the effect ranged from distracting to headache inducing.

After an hour and a half of art, openers Thee Ahs played, and were clearly excited to be there. They played with a lot of energy and everyone was having a lot of fun, but their noisy pop/punk didn’t click with the audience. Still, they have a lot of talent and aside from a screeching (literally) saxophone segment, they showed a lot promise. Thee Ahs will do great things when they find their groove.

The popular and talented Wintermitts were up next, and it’s only when you see them in person can you appreciate how much skill and hard work goes into the music. Plus, they appeal directly to my love of horn sections in rock music. Evidently, everyone was enthralled by and singing along to “Birds,” and “Sharks” really showed off their ability to layer together their instruments to stunning effect.

Finally we came to the main act, and from open to close, they crushed it. Synthcake’s music is weird and atmospheric on the album, but when you hear it live it has a darker edge and the carnival-esque quality stands out to the point that their songs will make you afraid of clowns all over again. Lana Pitre’s synth loops along with Kristy-Lee Audette’s trumpet and glock come together to produce a positively deranged sound on new track “Molding Through Seasons,” while older “Dancing Rain” took on a whole new life when performed live. It was a visceral performance, and they topped it all off by serving a synth-shaped cake made by Pitre’s parents. It was a bizarrely fitting end to a crazy show. 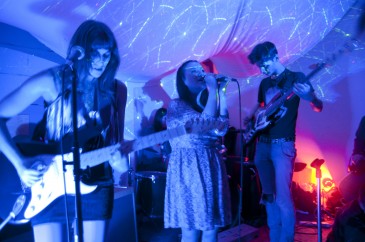