Die Mannequin’s Vancouver stop at the Cobalt was certainly a memorable affair, for better or for worse. Local guitar/drum duo Victories were the first to take the stage. With their hair tied into buns and adorned in blazers and sequined tops, Vic (drums/keys) and Tory (guitar) pounded through a brief but thoroughly enjoyable set of quirky garage rock numbers. “Wild Cat” rode a ‘60s surf rock beat, while set closer “Bake You A Cake” bashed away with a nasty blues rock riff. In spite of the small crowd present for Victories set, the duo made up for it with a unique sense of style and commanding stage presence.

The same unfortunately could not be said about the Lifetakers. This five-piece lacked a coherent image, as many members looked like they were picked out from other bands. Their ‘70s inspired blend of rock was largely forgettable with the exception of a thrashing, punky cover of Aerosmith’s “Toys in the Attic”. The group was subject to a fair bit of heckling from the growing crowd, a problem which was compounded by some rather snarky remarks made by the lead singer Marcus Ireland between songs.

Touring mates Dearly Beloved invigorated the crowd with their high-energy set of rousing fist pumpers. Bassist Rob Higgins was especially fun to watch as he thrashed around the stage maniacally, going so far as leap off the stage mike stand in hand to sing in the mosh pit. The vocal interplay between Higgins and Niva Chow highlighted the group’s inspired blend of punk, indie pop, and desert rock. Dearly Beloved were a shot of life after the rather bland set put on by the Lifetakers.

After an exceedingly long sound check, headliners Die Mannequin finally took the stage. Frontwoman Care Failure was the star of the night, graciously inviting audience members onstage to do backup vocals for the band, climbing tables, and jumping into the crowd. What could have been the best set of the night was unfortunately marred by some major technical issues including horribly muddled audio and a number of tuning problems. This meant that the group didn’t really hit their stride until they performed “Dead Honey,” but once Die Mannequin had it all together they were on fire. Their aggressive cover of Michael Jackson’s “Beat It” seized everyone’s attention. The set concluded with a noisy, chaotic 15 minute plus noise jam, which to some ears seemed out of place with the group’s character as a goth/punk unit, driving even this reviewer out of the venue. Perhaps such an exercise in atonal fury was the byproduct of the group’s frustration with the technical problems that dogged a good chunk of their set. In any case, the conclusion of Die Mannequin’s set brought the end to a memorable, if not surprising, night. 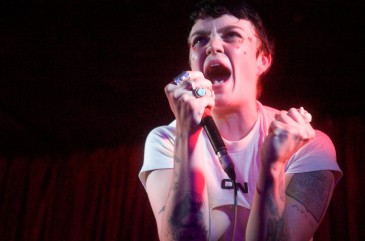