All The Time
Breaking My Heart

Waiting in a brightly lit but agreeable café promising all-you-can-eat chocolate fondue before an interview with Vancouver’s Chains of Love, I’m filled with considerable excitation. They’re a sparkling new musical menagerie with garage-y gifts and soul sensibility. I’d witnessed their lush debut at the Biltmore Cabaret in April and their rousing set was a pop pleasure airing aptitude to spare and a quick sense of play.

“I’m in puppy love with this band,” says Pizarro, between chaws of chocolate. “I don’t wanna just say that Chains of Love sound retro or Motown—that we’ve got a kitschy, candy shop vibe to us—I feel like there’s a raw element to our sound, too.”

“Our sound is like a strawberry dipped in chocolate,” giggles Gray, deliciously illustrating her mouthwatering metaphor at the table. “We have so much fun when we’re recording. I think it translates in what you hear.”

The sugary sweetness of Chains of Love is even more palatable now, thanks to Toronto-based Hi-Scores Recording Library, which just released a seven-inch of their songs “You Got It” and “Black Hearts.”

These layered, reverb-drenched and sun-soaked songs echo ‘60s-style Wrecking Crew production values, like AM radio from the fab era. Both tracks exemplify rousing, romantic pop and Pizarro’s sweeping and warm vocals form the smooth and confident centre of these mini-symphonies. The immediate future is looking sugar-coated too, with a gig during Music Waste, a week of shows in New York, and appearances at North By Northeast in Toronto and Sled Island in Calgary. August will see the completion of an EP, followed by a tour in September and October. All this buzzing has Pizarro dropping f-bombs left and right.

“You must excuse my friend,” razzes Gray, gladly. “She has the mouth of a sailor.”

Their blithe banter is refreshing, like BFFs, but that’s not the case.

“We haven’t known each other that long, actually,” Gray explains. “We met in a parking lot in Portland last August. I’d seen Nathalia around and knew who she was but was always shy around such a hot babe.”

With her dark flowing locks and prominent, pretty eyes, Pizarro recalls a young Ronnie Spector, and it’s an accurate appraisal.

“Obviously our huge influences are the Ronettes, Shangri-Las, Crystals.We all love that stuff—it’s just a given. We went with that Wall of Sound idea; lots of percussion, lots of layering. Originally, it was Felix’s idea to start a girl group. He’s our Phil Spector, without a doubt.”

“Yup,” agrees Gray, deadpanning; “He’s in there, too, with the murder and the guns and all sorts of fucked up shit.”

“I’m Kermit and she’s Miss Piggy,” Gray says of the group’s singing contingent while going through the merits of Muppetdom.

“I’m certainly Miss Piggy,” agrees Pizarro. “I snort all the time when I laugh, so it’s fitting. And Miss Piggy has great style, she loves to sing and she’s so dramatic. That’s me!”

The table ruptures into giggles as Fung strolls in, smiling.

“She is dramatic!” He teases.

“I’m good at two things in this world: singin’ and cryin’,” Pizarro squeals.

Early on, Chains of Love, faced some challenges in the studio. Pizarro’s difficulties with harmonies had Fung recalling an earlier conversation with Gray. According to Pizarro, “Felix told me that Rebecca said,‘harmonizing is my forté!’”

“I never said that!” says a reddening Gray, “Now I’m gonna sound like the biggest asshole.”

“I don’t paraphrase, Rebecca,” Fung says with a knowing laugh as Gray winces in disbelief, “I quote directly.”

For music fans, Chains of Love directly presents a precious gift from pop’s pearly gates. And, despite their tongue-in-cheek teasing, they’re forward-thinking too.

“What does the future hold for Chains of Love, besides flying cars?” Fung ponders aloud.

“I hope it holds all six of us continuing to perform music,” Gray says.

Chains of Love play the Electric Owl as part of Music Waste, June 3 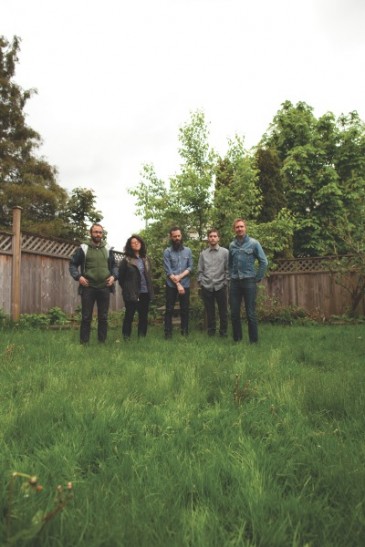 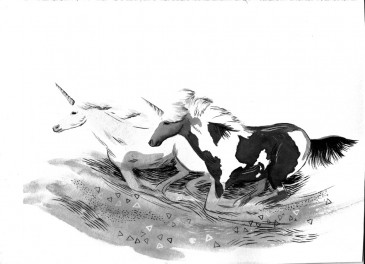