The Biltmore on Monday: the occasion being Jo Hirabayashi of Sprïng’s birthday; the celebration being a full cover of Paul and Linda McCartney’s Ram, their latest in a series of birthday “cover spectacles” from the Thor’s Palace circle. That a group of talented and passionate artists who live music manage to do credit to the McCartneys’ is a summary conclusion. So instead, here are some paragraphs about seminal ‘80s arena act, Classic Rick.

Being rudely rebuffed in the second round of CiTR’s Shindig a few years back—and dying, literally, after the fact—the night began with Rick’s resurrection: a Spinal Tap dirge, with a ministering necromancer uncannily reminiscent, in face and vocal power, of CiTR ex-Student President, Ryan Rosell.

Despite further parodies and farces in succession—druidic robes sharing the stage with glam wigs and wife beaters—the hefty conceptual weight held tight. Classic Rick is an affectionate but consummate parody of ‘80s cock rock: populist innervation courtesy of the shredders on stage, but dopey romanticism in lieu of gross chauvinism. Aside from working class ode “Night Shift” (dedicated to people who work at night, naturally), every song was about love: i.e. “A Mighty Fine Time to Make Love,” “Moving at the Speed of Love,” “The Fifth Element is Love (sic),” etc.

It has the quality of a boy playing with his disparate toys and favourite music styles. During the climax, the bluesy rock fury of Classic Rick gave way to a freestyle rap reprieve from the necromancer; naturally. The assemblage was complemented by Classic Rick’s surrealistic sensibilities—self-absorbed rock showmanship, endless drum fills, endless finales, endless solos, and one comically taciturn keyboard break. I’m going to stop killing the joke; it was fun.

Flown in from Oakland on the birthday boy’s bill, Spencer Owen is a musician’s musician, possessing a formidable discography and stage presence. Opening and closing with two solo pieces for piano, Owen’s live set was primarily composed of his singing over programmed samples, a few borrowed, most of them self-composed. With soulful vocals and a powerful falsetto, the craft dissuades dismissive preconceptions of the skeletal stage plot. There’s an utter charisma to the way Owen lets himself be possessed by his R&B backing loop: snapping out the beat, breaking down into wordless—powerless—lip-syncs, before filling the venue with his voice—with or without microphone. If there’s a recurring theme for the night, it’s that the people on stage were having as good a time as any audience member ought to have.

In another piece of necromancy, Sprïng and Synthcake took the stage to cover Ram, an album which has come to be recognized, in Jo’s words, as an “archetypal indie-rock album.” With a few others dipping on stage occasionally, the sizable group possessed multidiscipline talent enough for a high fidelity capture of Ram’s features. The two bands were especially apt for the project given their psychedelic focuses. At risk of listing off the individuals on stage and their respective contributions, or overemphasizing any single person’s contributions, the set was extremely cohesive. Ram, for better or worse, was hated—and is adored—for being a light and fun album and the stage was rife with people who were having a good time. It’s great being able to share that. 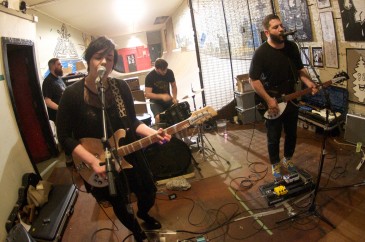