Psychedelic alt-grunge rockers Kubla Khan delight in the fact that today’s post-punk revival has made retro cool again. Their April release, Pincushion Man takes you back in a time machine. Its sound is something that might have been composed by Syd Barrett and Black Francis while they were getting high and picking apart the rock oeuvre of the past 50 years.

Keyboardist Danika Speight plays like a musical Billy Pilgrim, come unstuck in time. Her keys seem to float between different eras and genres. On “Bad News,” her synth playing is funk-inspired, while the piano on “C’est la Vie,” owes more to the Arcade Fire’s twinky stylings.

Tom Messent’s guitar melodies are immensely listenable. They combine old-school blues sensibilities with grungy panache and effortlessly catchy rhythms a la Is This It era Strokes. Meanwhile, Reise Rooney’s bass riffs anchor the eclectic aural mix. Aside from being pleasantly alliterative, his chords prevent tunes from floating too far off into the ether.

Drummer Adrian Long adds his own strength to the album by providing solid rhythms. Unfortunately, his beats fail to contribute energy and progression, leaving some songs to get lost in themselves. Tom Messant’s vocals function to counter this meandering. His singing has an odd warble, that a times sounds like Win Butler straining to do his best John Lennon impressonation. He seems to be consistently at odds with the melody, sometimes even threatening to overpower it. Yet, matched to the album’s whimsically bleak lyrics, the tension between his breaking vocals and stiflingly sweet melodies comes off as fitting.

“Who Cares,” is the standout track on Pincushion Man. It starts out with a beautifully dreamy acoustic guitar riff that slowly becomes darker and more confused as the lyrics become increasingly hopeless.

The danger of listening to a band that wears its influences on its sleeve—like Kubla Khan do—is that it can seem like you’re just listening to another album you can’t quite place. Yet, even this phenomenon of presque vu seems to fit in with the album’s theme of surreal maliciousness of the banal. Pincushion Man is the kind of album best appreciated at the end of a long night, when you’re tripping off to sobriety. 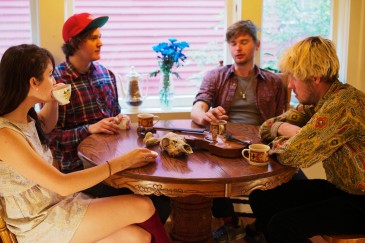