For one brief, ludicrous moment, the Burrard hotel wasn’t simply a 60s deco motor inn in the extra-sanitary heart of downtown Vancouver–it was the Waldorf 2.0. For one night only, its giant courtyard held two massive just-built skateboard ramps, and its many empty hotel rooms had been stripped bare and replaced with art installations. The Burrard’s parking garage turned into a sizable stage and every nook and cranny was packed with apathetic hipsters looking in on the action in considerable awe.

Kicking things off early were the High Drops, who played to a tiny and extraordinarily unenthusiastic crowd. Even though the audience’s focus was intermittently focused on whoever was falling off their skateboard at the moment, this quartet played like dynamite. Sun-slicked surfer tones funnelled through “I Am The Walrus”-era psychedelic revelry. Though no one realized it at the time, the High Drops started the trend for the evening of four-piece rock acts with one energetic, and one studious, guitarist. While Alexi Baris tended towards a mad-eyed stare and frantic chords, Mitch Charron was bent over his instrument like a mathematician with a calculator.

Aaron Read and his energetic ensemble are a summer band. This isn’t to say that Read’s excellent brand of fuzzy high-fructose pop is aimed squarely at the beach crowd, but that it’s impossible to imagine feeling quite the same way about the foursome’s melodies when dressed in jackets and toques. The night marked the release of a split seven-inch between Aaron Read and headliners Koko, so it was interesting to see the markedly quieter “Teeth Are All Somewhere” come up late in the group’s set. Read played the part of frontman well, radiating a genuine humility that felt at odds against the party atmosphere bubbling just behind the first lines of the crowd.

It was a special treat to see Koko play, even if it was a “one last time” sort of thing. Heavy-lidded frontman Konner Whitney did the fashionable thing and moved to Montreal, so getting to see his Vancouver ensemble again wound the clock back a few years at least. The ramshackle band could draw parallels with the Strokes’ Is This It, with biting pop lyrics hiding right in front of punk-rock chord progressions. Koko handled the surrounding party the best of the three bands, poking casual fun at everything around them while moving in and out of a stream of material both new and old. For a band who definitely didn’t have a lot of time to practice before this show, Koko handled themselves well before quietly ending their set and letting the skateboarders take centre-stage once again. 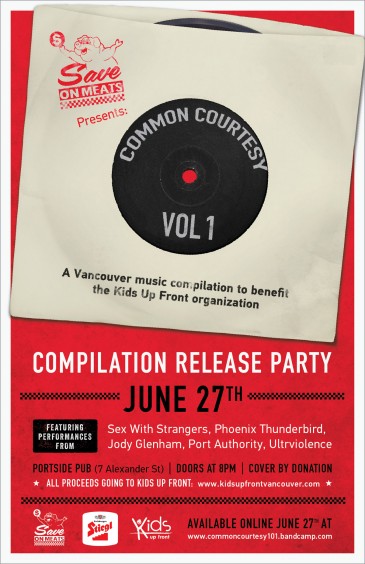