When it Comes to You

In 1998 when Refused named their final album The Shape of Punk To Come, it’s safe to say that they were imagining something very different than what passes for punk these days. Emo and post-hardcore have stripped the genre of its gritty edge and political outrage, replacing it with limp pop tendencies and high-school melodrama. Furthermore, punk’s aging heroes have shed any last vestiges of credibility, with John Lydon and Iggy Pop appearing in cringe-worthy commercials (for butter and life insurance respectively). So much has happened to sully the name of punk rock. Thankfully, the verve and spirit displayed by the three bands that played the Anti-Social Skate Shop gave us hope that there’s life in the old dog yet.

Openers Needles//Pins had some nicely executed hooks – especially on the choppy stomp, “Kalifornia Korner” – though some of their songs suffered a little from a lack of dynamics. On record, their singer’s voice is reedy and weedy, but live he’s got his yelping down perfectly, lending a much more gratifying bite to their tunes.

Toronto’s Teenanger burst out of the gates with the blistering “Bank Account,” a thrilling meld of the Stooges’ mayhem and Link Wray’s more raucous moments. Vocalist Riley Wild was brimming with tense energy, but not the grating machismo so often seen in punk frontmen. While definitely the tightest band of the night, their technical proficiency did nothing to temper the pure rock fury. They retained a rawness that kept things exciting.

Though their appearance suggested that headliners Dead Ghosts were the youngest band on the bill, their musical reference points were definitely the oldest. Their tunes hearkened back ‘50s rock ‘n’ roll and ‘60s garage. Executed with a youthful exuberance, their songs were to the point and seriously catchy, with vibrato guitar and reverb vox lending a definite authenticity to their classic sound. 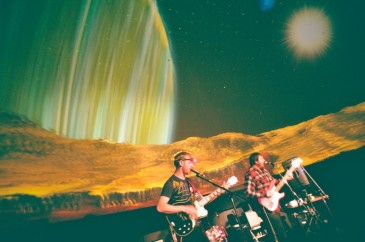