Along with the Future Islands and Teeth Mountain, Dan Deacon and his 14-piece band conjured up one of the most intense dance parties Vancouver has seen this year.

Teeth Mountain came on first to a full Richard’s on Richards. The band’s hypnotic drumming and melodic horns drew the audience in—drummer Kate Levitt was particularly engaging. The Future Islands, a synthpop band who also hail from Baltimore’s Wham City collective, continued to build excitement in the crowd in preparation for Deacon’s electronic pop spectacular. But few were prepared for what was to come.

Through the shadows, the shape of a vibraphone along with masses of circuits, wires and samplers could be made out, while the dulcet sounds of Enya wafted through the air. Dan Deacon and his band emerged. Deacon looks as though he whiles away his hours in the basement playing World of Warcraft, but when he and the band began to play, the venue became a pulsating, tricked-out sweat lodge, complete with spinning rainbow Jack Russell terriers and a flashing skeleton. This was not a show to attend as an observer—ten minutes into Deacon’s set I was drenched in sweat and was forced to punch my way through the frenzied audience to throw away my bag, sweater and notebook in a flurry before rushing to plug back in with the moving mass.

Deacon’s instructive games and participatory activities are not only fun, but possibly necessary in order to ensure the audience does not get excited to the point of aggression due to the explosive nature of the music. He encouraged the audience to join in a fancy dance contest, a mass high-five circle and finally a “gauntlet” formation where the audience made hand-bridges up the stairs to the balcony and down a back stairway to the main room. Nearing the end, he played “Crystal Cat,” forcing the audience to delve deep into their bodies to find one more ounce of energy.

It was an amazing performance although Deacon may have been having too much fun issuing his comically overdramatic instructions to audience members, who would follow and repeat whatever he requested. This included a “repeat after me” rant directed at the drummer from Teeth Mountain before the show even started, where Deacon got the audience to point and tell her en masse to “respect other people’s ideas”. This seemed a negative and out-of-context twist in a performance that otherwise remained fervently positive and fanciful straight through to a manic conclusion.

A final note: to those of you with bangs, be forewarned: if you attend a Deacon show they will become putrid strings of sweat, stuck to your forehead and dripping. You will stink, lose your friends, and look like you went swimming. But the experience will be worth it—it was so intense, I would recommend that you get a good night’s sleep beforehand. Or just pop some E, whatever.
[ed. In no way does Discorder support illegal drug use.] 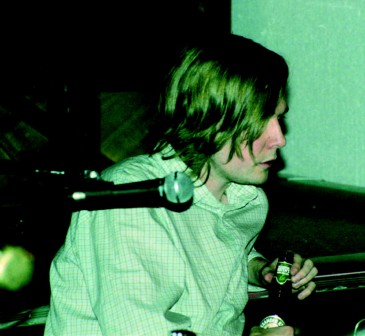