Veering between danceable and eerily abstract, Stott and Kowton explore that sonic hinterland between dub-step and techno, commonly associated with the Hyperdub label and by fellow countrymen Actress, Burial, and Kode 9.

After 2012’s genre-defining Luxury Problems, 2014 was surely Andy Stott’s breakout year. With his latest LP Faith In Strangers topping many year-end polls and even making the Washington Post‘s albums of the year, kudos goes to The Fox, who were both host and promoter for this night.

However, it’s velvety post-porno furnishings just weren’t a good fit for Kowton’s metallic beats. I couldn’t say whether this is a long-standing issue but the sound system wasn’t up to it. Swathes of industrial EBM textures from hot new EP, Whities002, fell flat. The narrow space wasn’t ideal either, where only those camped by the mixing desk could work up a sweat as the rest of us jostled for space between bar and side seating.

The upstairs bar was a welcome recess from the scrum, where local party-starters Nancy Dru and Max Ulis played proper house. With the capacity of an average-sized living room and with the friendly vibe of a lock-in in a VIP lounge, it was nice to grab a proper pint and shuffle to good tunes. Simple pleasures.

If Kowton’s set was marked by a continuous shove of pointed elbows, Andy Stott’s down-tempo, patiently crafted live show came as a relief. Building his opening track with woozy vocal samples layered over skittering dubstep, this was more than a re-play of Faith In Strangers. This was a piece-by-piece physical reconstruction. Bringing out the more aggressive elements of “No Surrender” and “Damage” in their raw glory, the more ethereal “Violence” and “Time Away” remained Stott’s signature sound.

Dropping some old school D&B as a nod, I assume, to his formative years, 2 a.m. rolled around all too soon and Stott closed out after less than an hour. Whilst it was an abrupt ending to a frustrating night, it was proof that less is most definitely more. 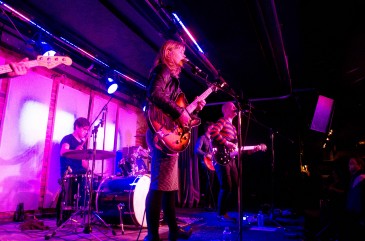