It was a frigid Thursday night that saw me trekking across town to the Remington Gallery on Main and Hastings, but you wouldn’t know it from inside. Body heat, big sweaters, and the warm glow of old incandescent bulbs kept the Remington’s performance space prenatal in anticipation of a calm evening of heavy drones.

Scant Intone, the solo project of experimental musician Constantine Katsiris, began the night with a warble that quickly matured into cosmic resonance. Some faint samples and looped phrases chirped an intro before transforming into a textureless, repeating sonic boom of low frequency oscillation that lasted the remainder of the set. Katsiris nearly managed to find the resonant frequency of people, as bones vibrated and walls shook throughout the meat of his performance.

After a brief intermission, necessary to recover from the internalized bass hum, Sarah Davachi took meek position behind a synthesizer. Carefully sculpted synth drones followed, slowly and meticulously evolving over time. Nothing about Davachi’s performance was abrupt or unnatural — her continuous, unfurling piece consisted of the patient unwrapping of new and more complex layers of synthesized notes and tones.

Konrad Jandavs’ No UFO’s turned out to be the most digital act of the evening. Far from being a pure laptop performance, it was Jandavs’ unique combination of minimalist beats, repeated samples, and heavy industrial drones that lent space between his, and the preceding, performances. The first set of the evening to feature noticeable “songs,” No UFO’s rich, beautiful compositions saw more than one audience member lying down on the floor, eyes closed and mind adrift.

The culmination of the night was in celebration of Secret Pyramid’s recently-released album, Movements Of Night. The man behind the project, Amir Abbey, looked remarkably at home hunched over table crammed with mixers, pedals, a reel-to-reel, and a keyboard. In past performances, Abbey had been know to gradually bring in cascading walls of amplified guitar cacophony, but his set at the end of the evening played a little closer to the chest.

Performing the pieces from his freshly-christened 12-inch, Abbey’s beautiful collection of quiet sounds fell into focus lightly, and each washed away in waves of sublime tones. Abbey’s true strengths as an experimental performer come in his ability to curate his performance to natural apsides — each song had a destination, often awash in overdrive, reverb, and static, and the brilliant points where things got truly loud and monstrous were by far the highlights of his set. 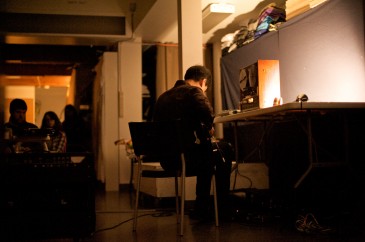 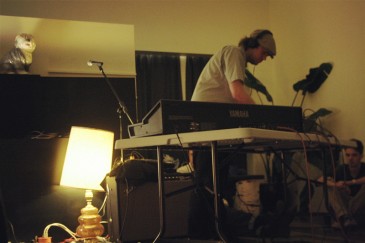