I hadn’t heard much of Lightning Dust before their show at The Biltmore, but something about the name drew me in—maybe because it sounds like a mysterious psychedelic drug from the future. Then I looked them up and found out that, not only are they mainly comprised of two members (Amber Webber and Joshua Wells) of Vancouver’s psych-rock flagship band Black Mountain, but they’re also influenced by, among other things, the films of John Carpenter. Having recently watched, and immensely enjoyed, Carpenter’s Dark Star, They Live!, and Escape from New York, I recognised Lightning Dust as fellow members of the same secret tribe of dreamers—rhizomatically linked and guided by the glimmering detritus of 20th-century pop culture—to which my friends and I belong.

While the sold-out show began to fill up, my friend, a sound-technician who was banned from working at the Biltmore for allowing a punk show to get “too loud,” pointed out the huge section of sound absorption panels missing from the ceiling in front of the stage due to water leakage. As the sound quality at the Biltmore has only ever been dubious at best, I anticipated a muddy mix of excessive high-end frequencies and flutter echoes. When opening act and former Lillix bassist Louise Burns, accompanied by her full backup band, started to play her set of Neko Case-like dream-synth folk-pop, my expectations regarding sound quality were sadly realised. Burns’ gorgeous vocals and poetic lyricism sounded more than just a little washed out and obscured by overlapping frequencies, while the bass could’ve been way more prominent. The band itself did great, burning professionally through a dozen or so 2-4 minute tracks mostly off her recent full-length, The Midnight Mass.

By the time Lightning Dust started their set, the floor was filled up with an almost motionless crowd. Even as the set drew to its climax, with Webber’s sister providing lovely accompanying vocals for “Diamond,” the stand-out single off their latest album, Fantasy, I was hard-pressed to find even a few nodding heads or swaying shoulders in the audience, as though everyone were in some kind of hypnotic trance—though I doubt it, because they were all talking really fucking loudly. While this didn’t totally suck for most of the synth/sequencer/electronic drum-based tracks, for a song like “Moon,” a quiet, melancholic, acoustic guitar-centred piece, the roar of peripheral conversations taking place was enough to almost drown out the performance. That said, the sound-mix had improved by Lightning Dust’s set, despite a couple hiccups of feedback. Other than the weak and overly-passive audience, it was a thoroughly satisfying show. 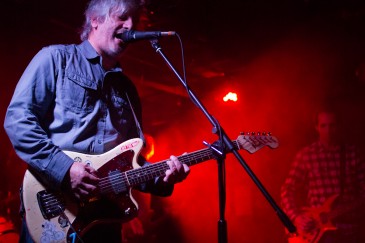