The Rickshaw Theatre is an interesting beast. Depending on what the event is, you could be walking into a lobby, a full-fledged theatre, or roughly half that if the curtains are drawn. In this case, the mostly-local bill played to the latter: a few rows of seats, a sprawl of cement and surprisingly few music aficionados. Blame the early doors?

Trail Of Broken Treaties were mid-set by the time I arrived, halfway into an onerous doom-drone fugue. Tome Jozic—also of Basketball—contributed psych references to the otherwise heavy and brooding anti-rhythms, while Ben Rogers, whose name pulls a different kind of weight, anchored the quartet in a solid smog of guitar noise.

Man Your Horse seemed seriously out of place on top of the giant Rickshaw stage. While this is true of most two-piece acts, these math-rockers are much better experienced at eye level. Despite the venue disadvantage, the duo played tight party-friendly guitar riffs and trigger-happy drum fills with atomic accuracy. What was nice to see was Julian Marrs taking a little less time getting into each song, allowing more jams to be packed into a brief but blissful set.

I went into Jung People with only one tidbit of information: their hand-packaged, transparent-green LPs were gorgeous, but it didn’t take long to figure out that the same attention to detail was paid to their performance. Hailing from Calgary, Bryan Buss (guitar) and Giordano Bassi (drums/guitar/synth) wore their influences pretty plainly, and if you’re a fan of anything on Constellation Records (Do Make Say Think, in particular) you’ll find a lot to like in their jazz-inspired post-rock act. Buss played an eight-string mammoth of an axe with surprising clarity, and a mid-set tempo change saw Bassi playing melodic guitar lines from behind his drum kit. Not to be missed the next time they’re in town.

Limbs Of The Stars are probably one of the most talented groups of musicians currently residing in Western Canada, let alone Vancouver. Although I’m not sure how much of the effect non-musicians absorbed during their set, the level of virtuosity exuding from Stephen Lyons and Skye Brooks (guitar and drums, respectively) alone was palpable to anyone who had ever sat down with an instrument before. Borrowing members from Fond Of Tigers, the foursome eke out a sound one part experimental freestyle jazz and two parts pure fun, and their set earned most of its enjoyment from seeing the intensity and joy with which the musicians plied their equipment for sound, with particular props to Lyons’ ridiculously masterful whole-body guitar solos. Something about seeing musicians of this magnitude jam right in front of you is pretty damn awe-inspiring.

By the time If We Are Machines came onstage, I had gathered from the entourage nosing towards the stage that it wouldn’t be my cup of tea. Billed as “psychedelic indie hard rock,” the band brought exactly what had been absent from the rest of the evening: hip-thrusting, drunk blonde groupies, and pretension. Although bringing something new could be a good way to end a night of music, I took my leave just after the synthesizer breakdowns started up. 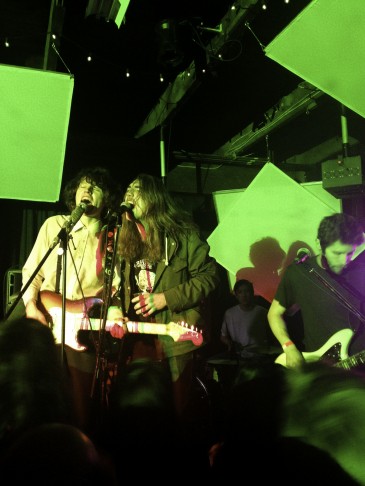