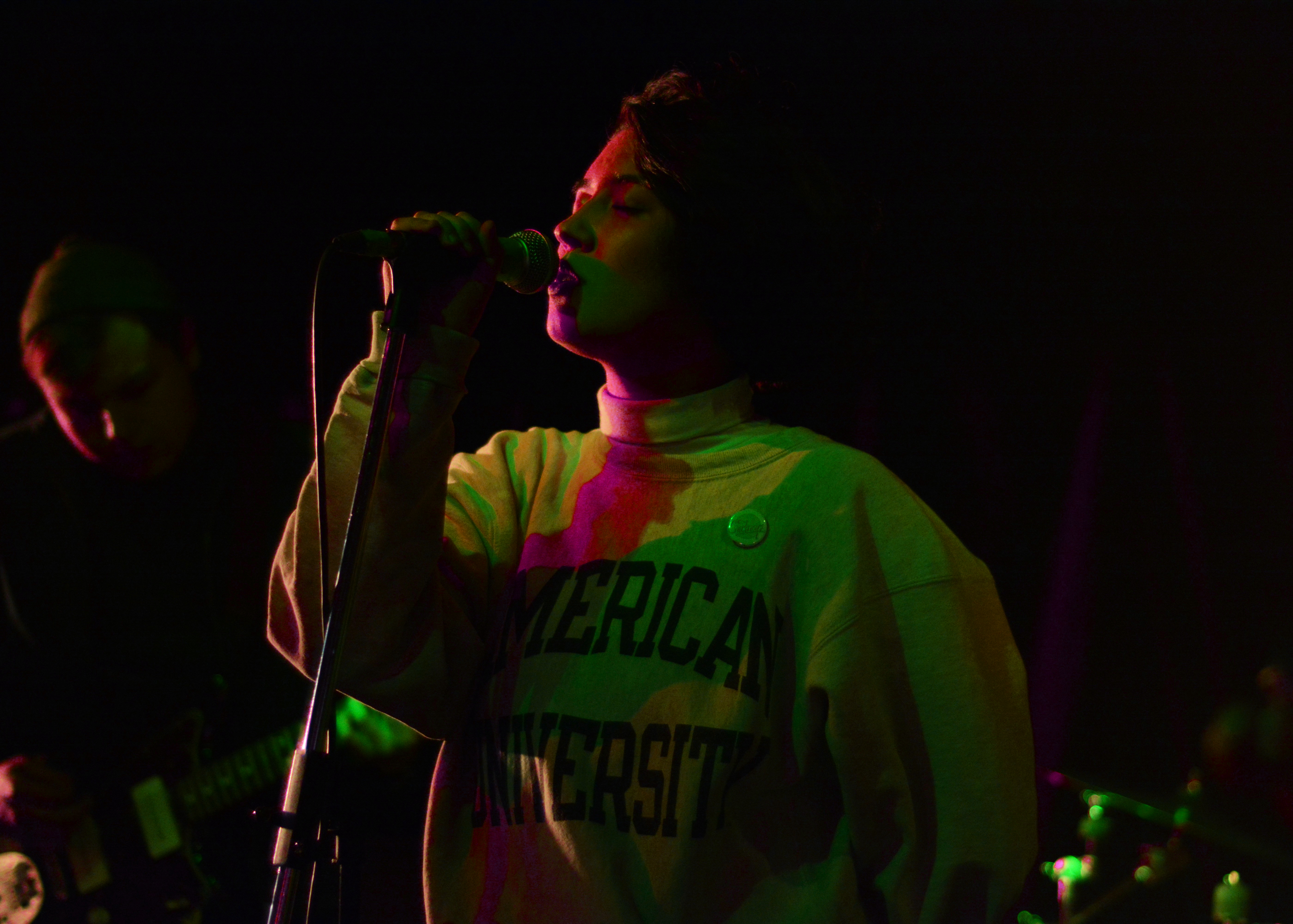 As I approached the dingy exterior of Pat’s Pub and Brewery, I had no idea what to expect from Winter Waste, Music Waste‘s offseason fundraiser. My friend and I took a seat at a table in the corner next to a Flaming 7’s lottery ticket dispenser and watched as the pub leisurely began to fill with a myriad of bourgeois student hipster imports. With a pitcher of cider and tray of fries in hand, we were ready to go.

hazy began her performance by reading intriguing excerpts from an essay about women in rock and their lack of representation in the industry. She slipped into a dreamy, neo-psychedelic cloud of distorted sound echoing with a fusion of feedback and obscured vocals. Cascading lyrics enhanced the vibration-filled atmosphere. The subsonic in the floor reverberated beneath my feet as I, too, was immersed in the shoegaze-y fog. Jangly, haunting guitar with chilling, minor chords, and thrashy cymbals exuded an unsettling aura. It was slightly difficult to distinguish or appreciate the complexity of the many sounds within hazy’s music due to how overly loud it was. Regardless, the overall vibe sent me into universe-reflection-mode.

Following hazy, Mirepoix’s strong rock intro left little uncertainty about their ample experience and chemistry as a group, with the exceptional skills of their impressive drummer, guitarist, and bass player. The alternative, folky voice of the singer contrasted with the rest of the music, in what would have otherwise been a very classic rock set. Nonetheless, Mirepoix had a enjoyable sound that was harmonious, but in a stompy, in-your-face kind of way which made it fun to dance to.

Next was Co-op, a trio of lo-fi rockers, whose sound after their mellow yet simultaneously heavy performance produced the aural equivalent of a drawn out back scratch in the throes of passion. At times the gig felt a bit too reminiscent of a Nirvana cover band, but this shortcoming was quickly remedied by expert drumming that provided the heartbeat necessary to sell this ‘90s band. Co-op created a tempo that people of all ages could appreciate, allowing older members of the crowd to dive into sweet nostalgia and forming a beat with which the younger folks could jive.

When Devours walked on stage, following Co-op, I could not help but wonder if there was any way his performance could live up to the high standard of radness that his sparkly, painted-on eyebrows had set. I could not have been more wrong. Immediately, his off-kilter electronic beats transformed me into the dancing queen I have always aspired to be. Devours’ angsty lyrics — “I was in love, and now I’m watching you burn” — were off-puttingly relatable and I liked it.

Maneater finished off the night with some grungy synth pop reminiscent of an awkward high school band playing punk rock in their parent’s garage, in the best way possible. Their dreamy melodies were kept up tempo with a swift beat in the background — each song held a steady rhythm to which the crowd joyfully bobbed around. I continued to bounce with happiness as I sauntered out of the pub, reflecting on the evening I had just had at 2017’s Winter Waste, a complete success in my opinion.