Gallipeau explains that the name was conceived by Layne: “I remember we were lying in bed at my house, and she was like, ‘One day I’m going to have an event called Coconutz & Bananas,’ and I was like, that’s so random. Like, what are coconuts and bananas? […] [When] we started the event, [Anasteja] was like, ‘We’re calling it Coconutz & Bananas.’”

Layne is a model, actress, performer and now entrepreneur. As That Siren Goddess on stage, she heads the Pearl Squad, a feminist modern burlesque troupe. She dominates the stage, flanked by performers who worship her as their dance mother. The titillating verve That Siren Goddess pours out on stage was visible even in the first photoshoot for Coconutz & Bananas, Gallipeau explains:

“We were in my house and she had bought two coconuts and a banana, and she was like, ‘We’re gonna make the poster right now.’ [Anasteja] oiled her body up, took off all her clothes, put the coconuts in front of her chest, put the banana in front of her downstairs, and she was like, ‘This is gonna be the poster!’ I was like, get it girl. I’ll take the photo.” The image is striking, sexy and playful — just like the event it promotes.

Gallipeau and Layne were friends before they were co-organizers. Their affection for one other shows as Gallipeau explains their working relationship, “I couldn’t do it without her, I wouldn’t want to do it without her.”

Coconutz & Bananas debuted at The Odyssey, a former gay club, August 2017. Layne and Gallipeau wanted to create a Trans-centric space for Trans artists, performers and allies to come together and celebrate Trans bodies and identities through visibility. Maiden China, who opened in January 2018 for Chi Chi Devayne and Shea Couleé of Rupaul’s Drag Race, is a regular on the Coconutz & Bananas stage, but most others are rookies Layne and Gallipeau want to make space for.

Both Gallipeau and Layne describe the event’s beginnings as coming from a sense of displacement when attending other queer parties in Vancouver. Referring specifically to her start as a performer at East Vancouver’s longest-running drag night, Man Up!, Layne says,

“[Man Up!] was more so for female-bodied queer people to occupy a safe space, which is great, but […] when you are Trans […] maybe you are female bodied, but male presenting. A lot of that gets taken away from you because you stepped into what other people would see as privilege. […] As a Trans woman, I often am looked at as not female-bodied, so therefore my occupying that space can become a bit hostile at times.”

She clarifies, “It’s not to say that that’s the influence of the proprietors of Man Up!, that’s more so just the community that’s been created around Man Up!. Because again, it’s a heavily feminist environment, but it’s also very empowering of female-bodied, identifying folk. So the missing [piece] is when we go out to these clubs, we’re just trying to have a great time and be social just like anybody else, but we have to become extra vigilant about the space that we’re occupying around us.” 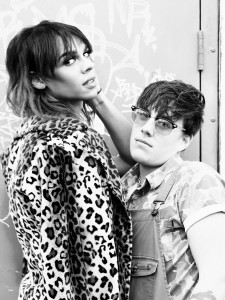 This sense of almost belonging within existing queer spaces in Vancouver was the push that Layne and Gallipeau needed to start Coconutz & Bananas. They brought their own ideas about safety, celebration, belonging and community with them to start a utopic queer and Trans party.

Layne says, “If you’re in a queer space, no matter who you are, you [have] the right to feel safe and to express your story. So I just decided to create what I would hope to be a utopia where […] you can come and celebrate your body, because your body is uniquely you. It’s part of your experience, it’s part of what makes you the beautiful you that you are.”

When we see queer and Trans people in the media, stories are almost always exclusively centred around their identities, around explaining their identities. Although these stories are obvious departures from cisgender-heterosexual norms, they often miss a far more pertinent and interesting angle — the story about a community rewriting what it means to build belonging and family, through gender expression, sexual discovery, artistic performance and embracing nuance in every aspect of their being.

Layne acknowledges that there is misinformation about the experience of Trans life, and wants to change that. She says, “It’s more likely that people will be educated if we have a playful carefree environment.”

She continues, “I feel like as a Trans person, it is our responsibility to be able to answer those questions. It’s frustrating as all hell, and no one should have to feel like they’re a science project, but the fact of the matter is […] we are not a very visible community, [and] we have to educate people. That’s just the way it is. But why not do it from a standpoint that’s going to be easy and fun and relaxed, versus a hardcore clinical education.” This open environment is something she works to foster through Coconutz & Bananas.

Gallipeau is equally passionate about the event as an opportunity to break from the intensity of queer identity politics and “call out” culture, which often pits people against one another inside the queer community: “These issues are very serious and it’s exhausting. The work needs to be done, it’s being done, but I think we can’t take it too seriously. […] These spaces are super needed, but like, have a laugh, play on things, you know? If you mess up, call each other in, and go from there.” This is a hopeful invitation to a community that so often attacks and condemns its members when they are perceived to have misstepped.

You can catch Anasteja-Syrën Layne and Kota Gallipeau hosting Coconutz & Bananas monthly at The Odyssey. Follow them on social media for announcements about tours, charitable foundations, and more community activism in the coming months.