The sterile smell of clean hits my nose as I am handed a towel, I feel a mix of nervous and horny, an odd blend of bodily sensation rushes over me as I wander through Steamworks Bathhouse for the first time. I feel tingles on my body as the sexy energy of my surroundings start to engulf me. I remove my clothing and place them in my locker, I take my towel and wrap it around my waist and I safely tuck the condom and lubricant I was handed by the front desk person away in my locker. What happened next is my little secret, I’m far from a prude, but you can take some really adventurous guesses about the experiences I had.

I will never forget my first bathhouse experience and if you speak with any gay man, it is much the same — a rite of passage. Some won’t go, but many would argue that they will be missing out on experiencing a pivotal piece of gay culture. Bathhouses, after all, are great places of sexual exploration for those who have deeper desires than the classic missionary-with-the-lights-out situation. I have often heard it said, and believe it myself, that “coming out” is such a liberating act that it often frees the individual from self judgment. It liberates one’s sexual desires and turns judgement away from said acts.

I got to talk to Del Stamp, General Manager at Steamworks Baths Vancouver, about bathhouses and other things. Steamworks is one of the most successful bathhouse chains in the world, with businesses in five cities. In addition to manager, Del is also a local DJ and social influencer. He is outspoken and respected in the gay community, and is partially responsible for the Vancouver bathhouse resurgence, whether he would admit so or not. He is also a generous and kind friend.

We spoke about some of the early cruising days: “In Vancouver, our tubs hersterrrrry takes us back to the beginning at English Bay. Who knew, over 100 years ago and pretty much any park in that area could be a makeshift bath house,” said Del. It’s true, to this day cruising culture is alive and well in some areas down by English Bay, and there are even a few online portals to help locate these places. Before money and amenities, any sort of warm night in the woods could play home to Vancouver’s earliest bathhouse experiences. I have even heard some epic stories from decades ago of spontaneous orgies behind the Vancouver Aquatic Centre on Beach Avenue. The HIV / AIDS memorial is placed just adjacent to Sunset Beach; this is certainly not random, as it was one of the most active cruising sites in the city in its day and the stomping grounds for many gay sex workers, a legacy that must not be forgotten. Because much of our history is oral, and / or died with the victims of HIV / AIDS, it is important we not turn a blind eye to what was once our reality.

During the HIV / AIDS epidemic, individuals exhibiting signs of HIV were often asked to leave bathhouses. The misunderstanding of the disease and serious fatality rate created a division within our own community. While on the subject of division, Canada has a history of bathhouse raids. Although there are no recorded accounts of bathhouse raids and arrests in Vancouver, there are numerous accounts in both Toronto and Calgary. (1)

Del is adamant that bathhouses are just misunderstood. He explained, “People often think that we are an unsafe space. […] We have condoms everywhere, an in-house nurse who will test, provide treatment and offer counselling, and there are several staff on at any given point. […] When you think about it, you and your belongings are much safer if you just bring your Grindr and Scruff tricks here – don’t bring a stranger into your home, bring him into mine. Can’t host? We can!”

Bathhouses are starting to become popular again. In 2009, a small app called Grindr was founded, and this tiny hand-held innovation made navigating desires of a carnal nature much easier. But as the need for human connection, community, community spaces and intimacy has grown, our minds have wandered back to the time-honoured bathhouses. Taboos around gay sex and gay sex culture are changing again.

Del attributes a lot of Steamworks’ success on being a community space, crediting the businesses community-minded approach to how much visibility and growth they have had. Through sponsoring and supporting local events, Steamworks has managed to garner a lot of confidence in its safe space values. Steamworks and the Pumpjack team up each week to offer an epic club night on Fridays called Wet & Wild, where you can literally see the biggest dicks ever having a shower above you as you dance, with DJ Del Stamp on decks of course. Steamworks has also inspired an amateur strip night at the Junction charmingly titled Dick Safari, where any person can come strip for prize money, sexuality- and gender-inclusive. 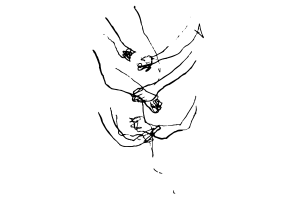 Through these events and others, Steamworks Vancouver has played their part in what has been a longstanding connection between DJing and bathhouses, between artistic expression and sex. One example of an artist known to perform in bathhouses is Bette Midler. She famously made a huge impression on the gay scene and, in turn, her epic career by performing at Continental Baths in New York City in the ‘70s. Look that shit up, it’s real. (2)

There are a few cruising tips and tricks inside the bathhouse. There is the basic “hello,” although there isn’t a lot of talking unless someone is getting railed, and then there is the verbal coaxing of the partner’s pace and / or completion. There is the gentle hand touching as you walk past someone in the hallway, and there is the intense gaze and up-and-down stare; you get combo points if you touch the hand, and intensely gaze at them at the same time. In the modern era, you can talk to others in the bathhouse on Grindr or Scruff and invite them to your room, come through innovation. Also, the biggest plus to a bathhouse experience is the high probability of having more than one partner at a time. Why have one dick when you can have a dozen?

To sum up this cacophony of random bathhouse musings, I would like to leave you with the very important topic of consent. It is mandatory. Always. If someone touches you and you don’t want to be touched, tell them. If it persists, seek help.

David Cutting is a local drag entertainer, writer and mischief maker. They are the host of Commercial Drag, a weekly drag show on Commercial Drive every Sunday at The Penny. You can follow them at @unicornriverchild on Instagram and @mommadust on Twitter.