Ambiguously West Coast the Backhomes have played but a handful of Vancouver shows. A quasi-release party for the Shake! Issued cassette of their debut alongside Sleuth and Zen Mystery Fogg further establishes the potential for this act to become a (nomadic) fixture of the Vancouver scene.

The evening of music at the Railway Club started with recent Shindig finalist Zen Mystery Fogg, a band for which my appreciation increases each time I see them. Though they play fuzz-drunk stomp-happy garage, Fogg work equally well in a less distracting setting, the haze of their faux spooky tenor more palpable. Chase Franson’s vocals are clearer, the ooos and ohhhs ring out further. The band is haunting in the sense of a plastic skeleton: earnestly delightful. Fogg builds an aloof intensity in each song, choosing inevitable aggregation over sudden force. This tension is more coherent in Thomas Molander deviations from drumming onto the keys, distilling the melodic progression into gripping simplicity.

Next up were Sleuth, the champions of Shindig 2011. Like their idiosyncratic sartorial style, Sleuth tow a line between twee and something more quotidian, affective in an ecstatic neighborly style. Much credit for this is owed to The Lion in Love’s calmly potent singing. Other elements of their jangle-pop came off perhaps quixotically, especially the sharply airy synth. That said, overall their sense of effervescence is cogent in their live performance. I look forward to hearing them again in the future.

Lights out and projector on, the Backhomes took the stage. Appropriating the visual motifs of the psychedelic, Backhomes craft with super saturated reverb in the service of hook driven indie rock. The projection of shimmering waves against the stage speak both to their musical style and Pacific sensibility. Both members on guitar, the tracks were inaugurated by the template swap of their programmed backing. This mechanical throb of percussion keep Backhomes disciplined despite their drifting tones and melodies that want to flare out into space. In this sense I felt the band successfully entangled garage workmanship with the ethereal, evoking shoegaze highs without shoegaze indulgence. And speaking to the discipline of their play, like the prior two bands, Backhomes achieve intensity not out of capricious divergence but focused aggregation. Their final song sweltered to a powerful high before fading into cries for an encore that they gave with modest aplomb. Standing ovations require that much at the least. 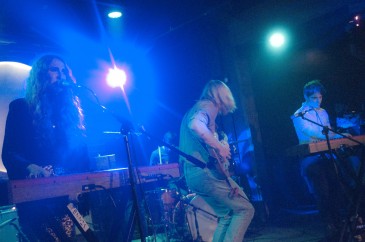