I get the feeling from talking to Vancouver natives that the Barcelona Chair don’t exactly maintain a consistent lineup—the last time I’d seen them was as a four-piece, so it was an initial disappointment to learn that their violinist had moved back to Hamilton, ON. I was skeptical that their brand of mathy post-rock could survive as a trio, but I was blown away by the sounds that persevered. Their guitarist can seriously shred, and the rhythmic convulsions of his body as he played was like a weird conductor’s dance. The trio conjured a lot of Japanese shoegaze like Sgt. and Mass Of The Fermenting Dregs, but the overall sound was rooted firmly in atypical time signatures, stop-start rhythms and dissonant chord structures. The dozens of pedals strewn about the stage made each song stand clearly on its own with thick delays leading into heady fuzz-based jams, and not once did my head stop to think about the fact that they were “down” a man.

Man Your Horse didn’t waste much time between songs, rarely stopping for more than a moment before launching into yet another high-energy tune. Their tracks didn’t really feel like complete, thought-out structures—more like loose jams organized around a batch of complicated riffs. Guitarist Julian Marrs gets bonus points for playing through both guitar and bass amps, creating a funky low-end harmonic that helped provide substance to his performance alongside bandmate and skinsman Scott Petrie. Rarely have I seen someone as excited as Marrs to be behind a six-stringed instrument, so I felt a little disappointed whenever he let his hands fall to deliver uninteresting lyrics caked in echo.

On the advice of a friend, who described closers Bel Riose as coming across “like icicles being driven into your eardrums by sheer volume” (in a good way), I took a defensive stance half-way to the back of the cabaret before they began. I was a little let down, then, when my ears didn’t start to bleed half-way through their “rock concert.” I really, really wanted to like Bel Riose, who are an unapologetically straight-forward rock ‘n’ roll duo, but I just couldn’t get into the traditional verse-chorus-bridge structure that all of their songs adopted. After the previous guitar-wizard-driven bands, seeing frontman Ryan Dolejsi pound out relatively simple songs on a supremely overdriven bass guitar was somewhat of an anti-climax. The brother outfit (sibling Geof plays drums) were sweating bullets by the end of their set, but I was still left scratching my head as to why they were playing with bands that had such a strong focus on technicality. I’d love to see Bel Riose again, but on a bill better-suited to their hard-up crunchy tones. 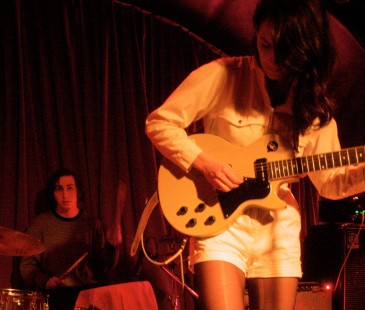