No fewer than four people with earplugs were spotted while White Williams was doing his thing one Wednesday night at the Media Club. A new fashion trend? It’s certainly possible. However, it’s more likely that certain traits of Mr. Williams’s music were being reflected back by the audience: stability, conscientiousness and, ultimately, a lack of risk-taking or excitement. How odd it seems, then, that Williams was paired up on a co-headlining tour with Lovepump United’s rising stars, HEALTH.

Yes, HEALTH, purveyors of spastic noise rock, whose performance was a visceral onslaught to the senses. They made use of guitar, bass, drums, a heavily distorted keyboard setup, an additional floor tom, an electric drum pad that triggered a thunderous whomp, microphone feedback, and sporadic vocals—all to create monstrous arrangements of sound and fury. The bassist (doing double duty as merch guy that night) flailed madly around when he was on the mic, adding even more energy to an already intense set. Afterwards, an audience member remarked, “Now that’s what I call suffering for your art,” a fitting description of what the members of HEALTH appear to go through on stage.

After all this, there was just something missing from Williams and his band. The opening instrumental was deep and moody, like the Cure with a melodica, but beyond that, it was somewhat of a rote recital of various songs from Smoke. Those who were fans of Williams’s first album probably found much to love in the bouncy, faithful renditions they heard that night. But for others, the songs came and went as only mildly enjoyable, with one droll melody after another leading up to the encore-free finish. Indeed, it was tough to tell whether Williams himself ever broke a sweat. Oh, well. 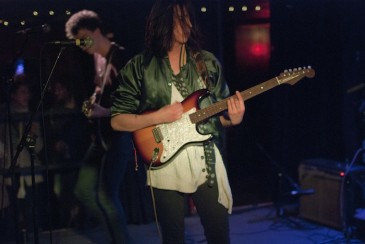