Behind the stage, a water-like light projection rippled on the wall. Vivid and organic, the Astoria’s high-ceilinged arches hunched darkly in contrast. As the image splashed, the surrounding dimness seemed almost arid. The pub was thirsty and the stage shimmered with the promise of tunes. As those scattered in attendance slowly formed an audience, local artist/musician Aaron Read knelt on stage, carefully adjusting a colourful palette of looping pedals. Picking at the electric guitar, his light notes spilled forward and spread. Gentle psych drones began lapping against every corner of the Astoria. Read’s fans were presented with a medley of extraterrestrial looping and layering, using selections of electric guitar, glassy vocals, and violin, for punctuation. All combined, the result was something like a drug-induced twenty-minute trip through space. But by the end, swerving cartoon planets got a bit boring. Admittedly pleasant, Read’s performance wasn’t a worthy reflection of his new Green Burrito release, Even Rats Can Feel the Sun. This tape is better left to speak for itself.


Also promoting their Green Burrito cassette release, Blue Hearts in Exile, dream synth trio Gal Gracen played next. Comprised of local talents, Patrick Geraghty of Role Mach (lead guitar), Adrian Teacher of Apollo Ghosts (bassist), and Jay Arner (keyboard), the pub’s energy was thick with anticipation. As a pre-recorded keyboard tune rolled out, the set’s airy soundscape emerged. Stencilling defined guitar notes over the key beat, Geraghty and Teacher infused their dungeon pop with elements of new wave jangliness. Geraghty’s commanding vocals were a highlight of the set’s third song, “Miss June Goth.” In sync with every guitar step, his voice eased the song’s key-shifting climb. With the brief explanation, “this song is about being pregnant forever,” Gal Gracen began a slower tune titled “Sylvan Tragedy.” Its pensive pace became a bemoaning trudge when coupled with Geraghty’s pain-stricken singing. Stretched over a steady key beat, there was no hiding the song’s sincerity. The set’s sixth and final tune was a weaving of melodies. The key notes orbited as Teacher took a seat at the drums for the first time during the set. As the song sped up, the crowd’s general enjoyment took form in some drunken moshing. With the final assault of chords, Gal Gracen was nodded into the echelons of one of Vancouver’s best new bands.


Taking stage in the early a.m., Watermelon faced a bit of a fading audience. Comprised of Thom Lougheed (lead vocals, guitar), Sophie Sweetland (vocals, bass), and Akanee Yamaki (drummer), the garage pop group are veterans when it comes to playing Vancouver’s indie venues. Although playing ten well-delivered low-fi tunes, the group’s single “How I Came” proved itself, still the definitive crowd pleaser. The set indulged in an enjoyable mix of Lougheed’s smudged solo vocals, and his pop chant duets with Sweetland. Set to Yamaki’s timely drum trails, Watermelon gave their audience all the catchy riffs and fuzzy distortion they have grown to know and love. It was a suiting end to a night filled with impressive tunes both live and on cassette. 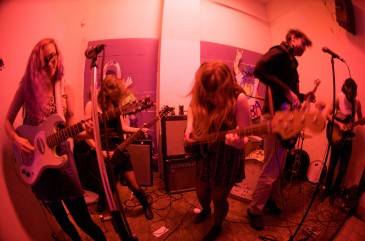 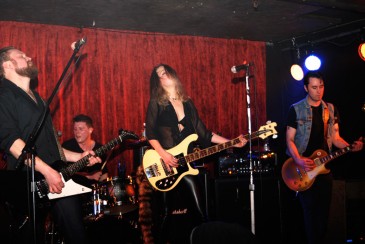 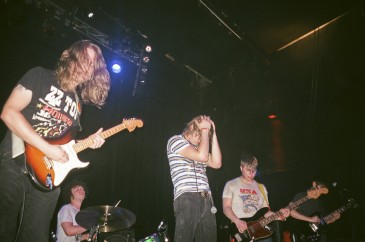