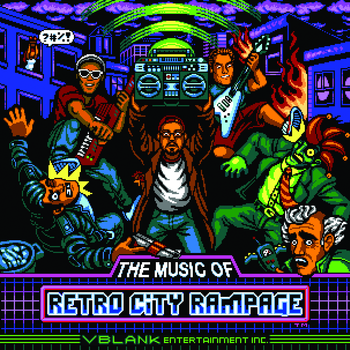 Chip music has an interesting appeal. It’s something we don’t think much about, but we all share an intrinsic familiarity with it. We grew up with these old computers and gaming machines generating live sounds with crude chips, so it is interesting to witness the unveiling of such an encompassing work using chiptunes.

In this, Vancouver-made Retro City Rampage is the perfect vessel: a modern video game in an 8-bit universe. Within it, local producer Freaky DNA (Leonard J. Paul), Surrey native Norrin Radd (Matt Creamer) and well-known video game composer, virt (Jake Kaufman) combined efforts to build a rich and comprehensive body of music that celebrates the art of chiptune while sustaining the demands of a gaming experience.

The soundtrack follows the game well by combining modern concepts with strictly NES-era aesthetics, sprinkled with pop culture nostalgia. After an initial heave of traditional rock and metal songs, the catchy “Half Steppin’” signals a slide forward in time through hip-hop, dance, dubstep, and funk, before throwing in some wonderful electro and New Wave. The bouncy “Toadstool Om Nom” pays an essential tribute to Mario Bros, while “Not Mega…” begins with a nod to the Mega Man 2 intro song (one of the best in NES history). There’s even a standout pop single in “Bit Happy.” Tell me you wouldn’t want to hear this song performed by LCD Soundsystem.

As this music was actually made for a real video game, it also contains music for things like cave exploration, driving around looking for stuff, and dialogue. These, importantly, allow the record to breathe, but as a whole add to the stylistic epicness of the album, anchoring the traditional video game elements of the music.

The Music of Retro City Rampage is available in mp3 as well as, amazingly, 12-inch vinyl (there is even a game-over style song at the end of each side). As one of the largest coherent works of chiptunes in recent memory, attached to a game that is poised to carry it far and wide, this album may just have the makings of a cult classic.