Leave Everywhere
Anticipation was in the air when I arrived at the Biltmore. The sold out show ensured the house was packed, but many hopefuls still stood outside in the rain, soaking wet, for the chance to see Toro Y Moi, Braids and Teen Daze.

Recent Discorder cover star Teen Daze took to the stage with a smile and a wave, welcoming the crowd and stating he was about to play some “dance music.” Teen Daze was an excellent opener: His fun, groovy take on chillwave ignited the crowd, turning the dance floor into a hot, sweaty mess. Clearly, these people were here for a good time. The smell of weed became especially potent at one point as the thudding bass tones emitting out of Daze’s laptop transformed into an angelic Nintendo soundtrack. The energy of the music rose and fell, swelling with each beat, building into a joyful crescendo of synth and piano lines. His set was relatively short, but the crowd loved it.

The positive vibe continued to exude from the crowd as Montreal’s Braids took the stage. Everyone surged forward as the curtain was pulled back, crowding the front and cutting off access to the men’s washroom. Everybody wanted a closer look. Braids started strong with “Lemonade,” the opener from their debut album Native Speaker. Having written about them for the March issue of Discorder, I was excited to see how their songs were performed live. Everything was pitch-perfect. Singer/guitarist Raphaelle Standell-Preston, keyboardist Katie Lee, drummer Austin Tufts and multi-instrumentalist Taylor Smith were a cohesive unit, creating the dynamic sounds on their album onstage with energy and dynamism. Halfway through their first song, though, Standell-Preston gave the crowd an apologetic look and stated she was “losing her voice.” While her voice did sound a bit raspy when she spoke, it soared when she sang, with the harmonies of her fellow bandmates filling in any cracks. Tufts even busted out some surprising Lion King-esque background vocals on one song. At one point, Standell-Preston asked the crowd for their “love and energy” and we were happy to give it. Tight harmonies, great focus and a strong ending endeared these indie-darlings into the hearts of anyone who wasn’t familiar with them before.

Toro Y Moi’s performance was the icing on an already delicious cake. I wasn’t expecting a full band to come out with South Carolina songwriter Chazwick Bundick, but there they were. The crowd was packed tighter than a drum circle, with people trying to get as close as possible to the chillwave wizard. Toro sounded great, as his voice soared over fuzzy, sexy songs like the baby-making jam “Got Blinded.” The combination of synth, guitar and shiny beats had the content crowd shaking it on the dance floor. The energy in these songs really came through live (the incredibly loud volume didn’t hurt), and Bundick rocked his keyboard hard, feeling each and every song deeply. Coming to a close with the fan-favourite “Blessa,” those who weren’t making-out to the swoon-inducing final number called out for more. 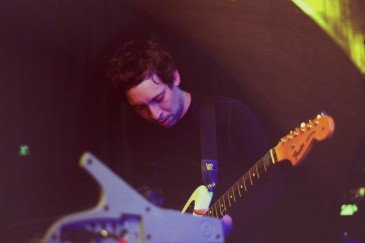