Music has its orthodox and its reformers. Every genre has those musicians and appreciators who are dedicated to defining the art form, positioning it within boundaries in order to preserve it’s values and creativity. Jazz trumpeter Wynton Marsalis asserts that music falls into two categories, jazz and not jazz, because jazz can be easily defined as a genre. The orthodox define and sanctify music out of love: the aim is to preserve it in the form they recognize.

These people would not do well with The Roots. By all appearences, the Philadelphia “hip hop band” is trying to make rap music into something that it never was, while simultaneously working to re-inject it with a life that it once had. Like the last descendants of a decaying dynasty, The Roots are trying to refurnish their palace with dignity and integrity, and replace the decadent corruption that currently reigns in the royal court.

The idea of The Roots as a “dynasty” is held together by this dedication to both renewal and continuity. By bringing the same diverse talent together again and again, The Roots assure their fans that the records will have a common appeal despite the eclectic aural differences from each to the next. The dedication to continuity remains in the small details as well: that The Roots have numbered each of their songs consecutively, from their first LP Organix with track number one to their most recent record The Tipping Point which ends with track one hundred and thirteen. But the stellar quality of the band’s back catalogue is rooted in more than a returning cast of characters. There is a great deal that makes this crew legendary.

Their first major studio work was Do You Want More?!!!??!. It was a wide open embrace to new listeners, self-deprecating and relaxed, saying basically, “Welcome to our show.” The first song on the record promises that the band “shall proceed, and continue, to rock the mic.” That might seem to be pure fantasy for a first song, but has now become definite prophecy as The Roots have continued to rock mics, stages, and recording studios for twelve years. DYWM?!!!??! has such a distinct, enjoyable and creative sound, (described as ‘organic hip hop jazz’) that The Roots became known as a funky live show with a wholesome party atmosphere. There was a certain unwanted novelty in the image of an acoustic/instrumental hip hop group—in the liner notes of their last record, The Tipping Point, ?uestlove rags on the record labels for promoting this image of the band.

Enter their sophomore record, Illadelph Halfl ife, the band’s response to that fun, funky, and optimistic image. Lyrically and musically, this album placed The Roots in a world of violent competition, where the band seemed to walking a treacherous tightrope between creating their music and succeeding in their musical careers. The record portrayed The Roots being stalked by the threatening shadow of failure, reminding listeners that hip hop is the survival of
fittest. Here, The Roots displayed their fitness by matching the aggression of the music with a rhythmatic assault, appealing to a determined, troubled, and energetic passion within the listener. This spin towards the darkness took fans out of the bluesy nightclub and into cold Philly streets of softly-spoken threats, a trip that presented a strongly alternative perspective.

Album three, Things Fall Apart, brought The Roots the fame and notoriety that won the group a Grammy. This record marked a significant fusion of their previous two records. The positive energy of DYWM?!!!??! cut with Illadelph Halflife’s dark introspection, merging the themes of positive hope drama of a modern tragedy. The feel of this album is aptly summarized in the hit single “You Got Me” featuring Erykah Badu and Eve, wherein all the lies and games of relationships are put side-by-side with the trust and commitment of true love. How can these bipolar elements not tear a relationship apart? This tension between hope and despair, success and failure, authenticity and affluence is the high wire that The Roots still walk.

After the release of Things Fall Apart, it seemed that The Roots were once again dangerously close to being painted with a single brush—they were “conscious rap”, the “back-pack hip hop”, successfully “alternative”. Their three records were so well done, and so well produced, that questions arose about the band’s future prospects. Despite their talent and acclaim, they seemed to be confronted with a problem: their integrity wasn’t universally marketable. Following Things Fall Apart, The Roots released a devastatingly vivid live album The Roots Come Alive! in which they recouped all their hits from their three records in an ecstatically energetic presentation, but the glory of the band seemed to be shadowed by fears that they were on the edge of the short careers typical of disposable, spotlight-of-the-moment hip hop.

2002 saw a change of tactics. The Roots bushwhacked their way from the top of the underground into the mainstream on their fourth major-label studio recording, Phrenology. Phrenology presented a straightforward approach different from the artistry of their previous work. Two tracks off the album seemed bluntly topical: “Water” focused on the place that drugs and addictions play in the musical and urban community, and “Pussy Galore” exposed the marketing of women as the cash cow of the advertising industry. The two leading singles off Phrenology were the “The Seed 2.0” and “Break You Off”, both of which are serious deviations from the rhythms of The Roots’ past, and instead contain melodic choruses by male soul singers. These two songs, with their dynamic
delivery, landed the tracks on the top-40’s lists. The message was clear: The Roots are hip hop, but they entertain clandestine affairs with rock, soul, and
pop music.

All the major issues of Things Fall Apart and all the musical revisions of Phrenology were carried into the creation of their latest record, The Tipping Point. This album fused the dramatic elements of their first three records with their successful experience in musical exploration in Phrenology. Essentially, The Roots changed their narrative from that of a band on the outside of the mainstream to that of a group now accepted within the system. Their perspective, however, remained as critical as ever. The songs acutely judge the poor quality of a lot the music flooding the scene, making subtle jabs at the fans of pop music in the choruses of “I Don’t Care” and “Don’t Say Nuthin’”.

Fundamental to their career is The Roots’ concept of themselves as more than a band, but a crew, and in their words, a “dynasty”. Time has shown the core band-members to be lyricist Tariq “Black Thought” Trotter, drummer Ahmir “?uestlove” Thompson, bassist Leonard “Hub” Hubbard, and keyboardist Kemal Grey. Another key aspect of The Roots’ career is their integrity: a trust is developed between musician and listener. Initially, this integrity is born of the fact that the band is largely instrumental: listeners tune in believing that they are hearing old-fashioned musical skill, and not digitally manipulated tracks. Lyrics also contribute to this: Black Thought’s writing focuses on a lot of imagery that is very public, but not cliché, and he understands how people relate to music. In the song “What They Do”, the band begins with an elaborately crafted overture of fragile keys, synths and deep rhythms. Black Thought raps “… Creator of original sounds to send to stores / you take home, to absorb and sweat it out your pores /Now who can stop the music runnin’ through these my motto’s to / Never do what they do…”.

There is an empathy in The Roots’ work that is vital to understanding them as more than talented musicians. Empathy, perhaps, is the basis for what makes us human. Without our ability to communicate feelings, we would doubtfully succeed in forming any meaningful relationships with society or loved ones. In a rap industry that thrives on uniform lust and antipathy, (a.k.a. sex and violence), a band that can be both a thunderous force and a soft, articulate voice is a band dedicated to a real relationship with the listeners. By following The Roots’ career, one develops a trust that the band will not let you down, and you
begin to take them as seriously as you would your best friend. On the last track of their latest album, Tariq’s voice cracks and strains with the emotion of
his words, and listeners have no choice but to be moved and grabbed by this simple effect. After you’ve been touched by this finale, you read the liner notes to find ?uestlove smirking at you. As he writes in the liner notes: “…some 113 songs later this is the songs that every surface fan… and misguided critic… thought we been making. Perhaps some 7 albums later they might actually listen.”

The Roots play two shows at the Commodore

Ballroom November 9. Zach Goelman will be 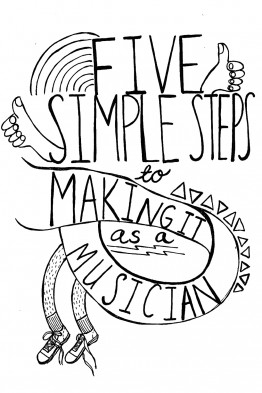