Both the Psychedelic Furs and Echo and the Bunnymen have played Vancouver at least once in the past several years, but nothing pleased me more than to see these two acts pair up for an ‘80s-inspired evening of old school pop music fun.

First up were the Furs. Different this time from their show last April was the addition of a keyboard player. Hooray! Remember those guys? Those lonely looking characters, usually tucked in at stage rear, diligently tickling the ivories in the long-gone pre-grunge days of yore? It just made sense that such an important band of the ‘80s would bring back probably the most definitive instrument of that decade. Although sparsely attended at first (likely because the show started promptly at 9… and I mean promptly folks. Don’t ever be late for a Commodore show, or you’ll lose, lose, lose) things tightened up a bit into their hour-long set. Fans were treated to favorites spanning their career such as “Heaven,” “President Gas” and “Heartbreak Beat.” But the high moment came when the stage was bathed in a glow of fuchsia to the tune of “Pretty in Pink.” I’m sure I wasn’t the only girl who felt like a young Molly Ringwald at that moment. Front man Richard Butler seemed to be serenading the front row as outstretched hands reached up to show their approval. One even handed him a pink rose. Sweet touch, I thought. Overall, these guys were fantastic to hear and see, as their enthusiasm and very obvious love for the stage made for big energy from the crowd. Butler’s beautifully raspy vocals have aged like a fine wine in their 20-year career and with his dozens of smiles and “thank yous” at the end of their set, you couldn’t help but love this man. He was wearing a pearl choker, for God’s sake! That’s cool in my books.

Forty minutes later, the Bunnymen took the stage. Vocalist Ian MacCulloch’s back lit big hair in silhouette was eye-catching and he apologized for having “a touch of the flu.” Welcome to Vancouver, Ian. By now the mostly 30-something crowd was filled out and the two or three beer had kicked in. People were dancing, people were bouncing, people were singing. Like the Furs, they had six members on stage (keyboards included!) and they too sounded not a day over 1986. Although not as animated as the act before them, somehow Ian just standing at the mic with shades and a smoke as trippy, swirling pictures danced on the screen behind seemed to work. Their repertoire was speckled with hits from “Bring on the Dancing Horses” to the crowd pleaser “The Killing Moon,” and some neat-o covers like James Brown’s “Sex Machine” and the Doors’ “Roadhouse Blues.” And for all you Lost Boys fans, yes, they did do their soundtrack version of “People are Strange.” From close to the stage to far at the back, they sounded perfect.

Despite the odd teen-memory addled thought of “I must be getting old or something,” I was very grateful to acts such as these two for keeping the good old-fashioned pop music genre alive and well. And anyone who went to this gig to see “old ‘80s acts” was, I’m sure, pleased with both bands’ abilities to remain very valid pop acts of not only yesterday, but today as well. 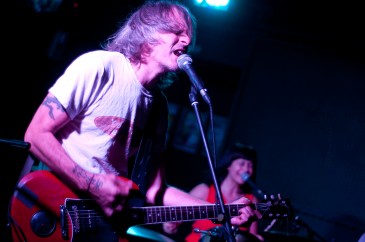