There are such things as Notwist people. Taking cues from the gentle, intellectual heart of the band’s frontman Markus Acher, Notwist folk tend to look like they could use a hug, a book and maybe some dancing in their living room when no one’s looking. Most of all, they’re looking for that sonic moment of bliss and catharsis made possible only by a German electronic rock outfit, which, through almost two decades together, has no doubt felt its share of pain.
On their visit, the Notwist didn’t disappoint, making the cavernous Commodore Ballroom seem smaller and the introverted Notwist people feel less alone. The band’s overwhelming temptation to pummel the audience with over enthusiastic glitches and proggy jams seemed hard to avoid at times, but the evening’s gems lay in its more subtle moments, such as during “Gloomy Planets” from this year’s The Devil, You and Me. There, Acher and company let their guard down and turned their backs to the crowd, playing for each other and indulging in the endearing, hopeful melancholy that has bonded the band for 19 years.
Notable awkwardness ensued when lanky, bespectacled lead programmer Martin Gretschmann whipped out a light saber near the end of the set and uncomfortably played with it. Nonetheless, Gretschmann’s stage antics were a welcome reprieve from the obnoxious dudery of DJ opener Odd Nosdam, who dominated his set with one-liners usually escapable by turning off CFOX in the morning. His San Francisco origins and DJ Shadow influences made for a promising venture in theory, but his frat-boy persona was so offensive that some Notwist supporters started shouting for him to leave the stage by the end. Disappointingly, Notwist vocalist Acher uttered few words during his band’s set, but his infectious kindness lingered. More proof that the loudest voices aren’t often the ones we most want to hear. 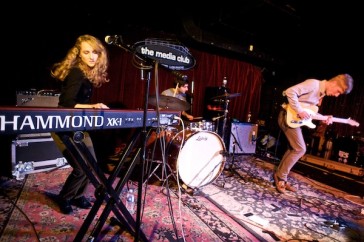