I guess you can’t expect a huge crowd on a Wednesday night. But, I still feel bad for those who missed the Morning Benders show. They should have skipped studying for midterms like me.

After a short-catchy set from a young group called Cults (not to be confused with the Cult), Long Island’s Twin Sister, hit the stage. They instantly won me over with their cool, relaxing demeanor and their spacey-disco sound. There’s a subtle mystery to lead singer Andrea Estella’s breathy vocals and stage presence, and I thoroughly enjoyed the cute conversation attempts guitarist Eric Cardona had with the crowd. Estella and Cardona had a great dynamic and really know how to trade off and let each other have their moment. A good example is with the airy tune, “Lady Daydream.” The twangy, echoey guitar hits so perfectly, just as Estella pulled back her vocals. Twin Sister ended on a high with a groovy cover of La Boinda’s “I Wanna Be Your Lover,” followed by, “All Around and Away We Go.” Even on these dance induced songs, there’s always this layer of futuristic/dreamy ambience that make their music that more appealing. Next time Twin Sister is in town, you can bet they’ll be headlining their own show.

The Morning Bender’s sophomore album, Big Echo, proved they are a band in the midst of transition. They have moved away from the conventional California, indie-pop sound and it was interesting seeing them balance their old sound with the new. Songs like “Pleasure Sighs” evoked images of the coast and ocean waves, but without the generic and happy, “fun in the sun” vibe. It glided flawlessly into the atmospheric tune, “Stitches” and everything just felt ethereal and hypnotic. Mid way through the set, the band didn’t bother with a smooth transition into their upbeat indie-pop songs like, “All Day Day Light” or “Boarded Doors.” Front man, Christopher Chu basically just said, “So now we’re going play some songs that you can dance to. You guys look like you want to dance.” Whether it was the atmospheric tunes or the straightforward pop songs, the Morning Benders played with such precision and neatness. The guitar licks, harmonies and even their intense “freak outs,” sounded clean and crisp.

As expected, the band closed with “Excuses.” It was one big sing along and Chu looked confident leading the crowd of fans. The “dum da dum” vocals were looped and eerily, it echoed in the background as the band played louder. The song ended with a mesmerizing instrumental outro, all four members crouched down to the effects panel and started manipulating the sounds until gradually, each layer was removed and all that was left was the vocals. Sounds cool, but I didn’t get to appreciate any of it! I failed to mention one thing. Throughout the entire show, this drunken moron kept yelling things out. And so while the band was doing this really neat experiment, this idiotic drunk guy started singing irritatingly loud. He killed the moment and everyone wanted to punch him in the face. Luckily, the Morning Benders did come back on stage for an encore. They played their latest song, “Virgins,” with no rude interruptions.

Within a year, the Morning Benders have played in Vancouver three times. But, even if you caught the last shows, don’t expect anything redundant. It’s exciting seeing them evolve and test out new things, so you don’t want to overlook their live shows…even if there is a stupid drunk fan yelling every five seconds. 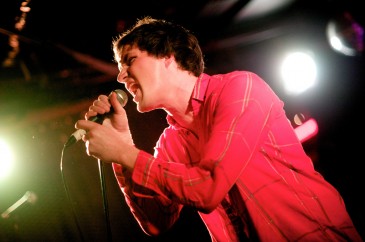 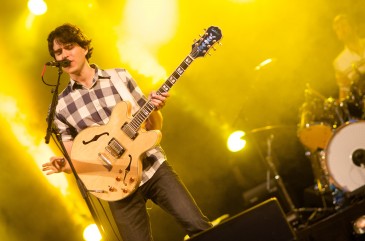