Okay, so if you weren’t at Fortune Sound Club for this show, you should probably just… well, you’re kind of a dink. And judging by the embarrassing showing, most of you are dinks.

First up was White Lung. In case you haven’t heard, they have a new guitar player. It’s not all chicks anymore, which I know was a fixation for some. The new guitar player is a dude, but this isn’t turning into cock rock. He seems to be fitting in nicely with the rest of the ladies, and his skills are pretty good too. The band ripped through their set, playing to a small but captivated audience. They never hit a wrong note as far as I’m concerned—I just wish more of you were there to appreciate it.

Next up were Twin Crystals. This was only the second time I’d seen them, and boy does a sound system make a difference. After the first song, Jesse Taylor asked the crowd “Is it loud enough for you?” I’m not sure if he was trying to be funny or not. I felt like I got my ass handed to me by them. I could feel them in my gut and not in a bad way. Sadly, their set was marred by equipment problems, which was a shame, but, you know, shit happens.

The other shame was the already thin crowd that thinned out after their set. This didn’t seem to bother the cheerful folks of the Intelligence. They seemed chipper, thanked us for coming and asked the light guy for a crazy light show. These guys hammered out a quick, upbeat set that got me off my ass and even got that ass moving slightly. I saw other asses wiggling a bit too.

Did I mention you missed a really great show??

[ed. A lot of us dinks were at the Shindig finals… jerk.] 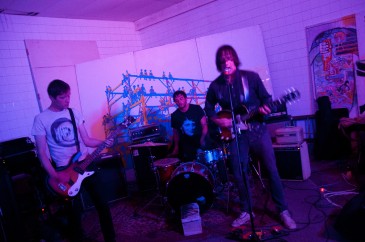 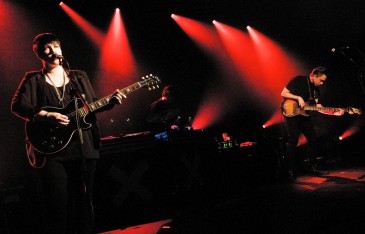