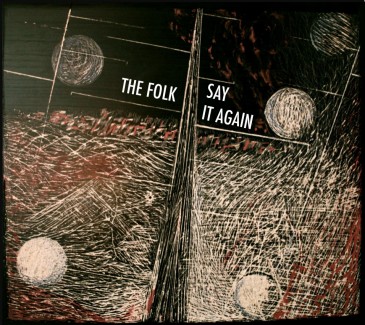 Toronto five-piece indie pop band the Folk have released a three track EP this June called Say It Again, which is essentially a series of anthems. It’s a follow up to their December 2011 release You Say, I Say, and while it isn’t necessarily a departure from their last release so much as a continuation, it shows definite growth, calling upon the sounds of indie pros The Knife, The XX, and Broken Bells.

The first track, “Rules of Youth” is breathy stuff, anthemic relaxation fit for a California road trip. It’s a great melodic choice for the opening track and sets the tone for the rest of the EP. Sara Bortolon-Vettor’s vocals are sweet and she obviously has great chemistry with her twin sister, Emma, on guitar. The three other members are best friends, Mark Ferrari on guitar and vocals, Liam Magahay on bass, and Patrick Rody on drums.

The second track, “When I go Away” isn’t as strong as the first and last, but it does have a constant, mellow beat with mechanical, but clean, guitar sounds. Ferrari’s vocals add grittiness that wouldn’t exist without his contribution, something similar to Dan Boeckner’s work with Wolf Parade and Handsome Furs.

The intro of the third song, “Say It Again”, is where you’ll find The XX’s “Crystalised” is a clear influence, and while The Folk’s song is considerably more pop, the similarities are obvious. The lyrics begin quite poetically, right on cue with the genre.

While Say it Again doesn’t scream originality, it does fit in with the current brand of indie rock, and it’s hard to disagree with a winning formula. It is sure to be met with the same positive reviews that You Say, I Say had.