It was a Monday night, as smoke crept across the stage at the Biltmore Cabaret and the opening band’s first track, “Thunder,” marked the start of the show. Opening for the Dodos was Cousins, a two-piece pop-grunge band from Halifax.

From the song’s name you might expect a roar, but instead this thunder rolled. Frontman Aaron Mangle’s doleful wail began as an undertone but gradually built to a howl over the course of the song as Leigh Dotey pounded out an unrelenting rhythm. Mangle’s singing was reminiscent of Jim James of My Morning Jacket, with his voice containing a softness and yet a power simultaneously.

Outside of a brief interlude at the 15-minute mark to provide an odd yet welcoming tribute to Pisces, Cousins is all business. They powered through their set of songs full of gradual escalations that become detonations before closing out with “Die,” the final track on their latest album The Palm at the End of the Mind.

Like Cousins, the Dodos are a band of slow builds and fierce rhythms — so fierce in fact that David Letterman himself couldn’t stop commenting on drummer Logan Kroeber’s performance of “Confidence” on his show just six days before the Biltmore. “But honest to God, how about the kid?!?” said Letterman after thanking the band.

The Dodos started with “Confidence” on Monday and Letterman was right; it’s hard to describe the way Kroeber drums. Self-assured, imperative, and confident, his drumming has a relentless voice of its own. It’s not that Kroeber overpowers singer Meric Long, far from it; they rose and fell in a harmonious balance as each song swelled. Also joining Long and Kroeber on stage was a third musician, guitarist Joe Haege, who’s been recruited for their tour and fit in flawlessly.

Though new album Carrier was well represented, the Dodos made sure to delve into the depths of a solid back catalogue. New songs such as “Relief” and “The Current” were joined by hits from previous albums, including “Black Night,” from No Colour and holder of over half a million views on YouTube.

It seemed for a moment that the Dodos were leaving the crowd with “Good,” a song that exponentially grew from a twangy-electric finger-picking rhythm to a catharsis of howling guitars and rattling percussion artillery before it exited with a fuzz of drum beats and “ohohohoh” intoning.

It’s a natural fit for the end of a set but luckily the crowd at the Biltmore didn’t have to wait long for an encore; the Dodos let them cheer and chant for barely a minute before another two-song set.

The real final song of the night was “Fools” from 2008 album Visiter. The quiet-loud-quiet over relentless rhythm dynamic combined with a solid “Woah oh” sing-along refrain made it a highlight and favourite even in a night of loyal fans being rewarded with what they came to hear. 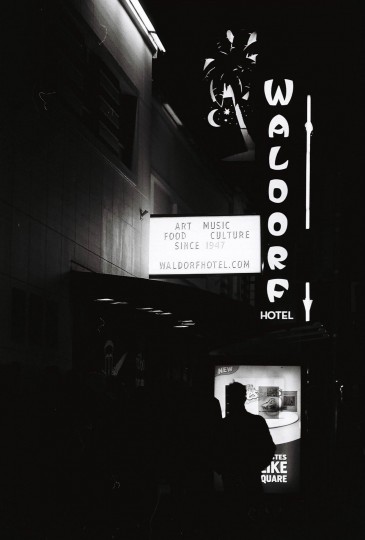