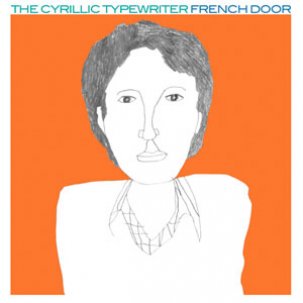 “кириллица пишущая машинка” can be loosely translated from Russian as “Cyrillic writing machine.” There are a dozen countries whose official language(s) employ the Cyrillic alphabet, and countless ethnic dialects that unofficially use it. In fact, a Cyrillic typewriter would communicate ideas between over 250 million people worldwide. This may not be the intended meaning of Jason Zumpano’s moniker, the Cyrillic Typewriter, but on his sophomore album, French Door, he’s certainly opened the doors of poetic discourse.

With the Cyrillic Typewriter, Zumpano seamlessly pairs eclectic and diverse arrangements with far-reaching lyrical poeticism. However, despite its poignant eccentricities, the project has remained coherent enough to retain pop accessibility, and on French Door, Zumpano enlists veteran indie rockers (and old Destroyer band-mates) Dan Bejar and Scott Morgan to restore balance to his songwriting. The reunited trio are consistently joined by Nathaniel Senff on saxophone, Christina Rzepa on cello, and Megan Bradfield on double bass to create an aural spectacle whose dynamics encourage active listening.

French Door begins with Senff’s Colin Stetson-inspired reverb before unveiling the first whirlwind of intoxicating lyrical medleys, whose pace quickens and slows with unpredictable grace on opener “Dizzy & Blessed.” The album continues in this manner, with thoughtful, calculated lyrics juxtaposed by brief instrumental arrangements that range from triumphant elegance to momentary omen.

Everything happens so quickly on the first half of French Door, that a single mood rarely has time to sink in until halfway through, when it reaches a climax on the wonderfully dramatic “Great White Lodge.” Here Sneff’s drunken, often quixotic, saxophone faces Rzepa’s lugubrious cello in contending, albeit brief, exposés before suddenly halting to make way for Zumpano’s depressing cover of Devo’s “Gates of Steel.” Yet, the latter half of the album proceeds in a subdued fashion that rarely returns to the whirling dynamics of the first six tracks.

Although many moods, themes, and ideas are up for the taking on French Door, their changes are interesting enough that you’re happy to just let them float by; if you try to force this album, it pushes back with obscure references to mysticism and overlooked intellectuals. French Door borrows from the experimental pop canon through its nuanced idiosyncrasies, and fluent listeners will find a comforting familiarity in Zumpano’s unabashed alt-culture references, while adventurous newcomers should welcome its unexpected approachability.