On one of those late-March nights, so obviously orchestrated to mock those of us who believed spring was duly sprung, a gathering of artistically-minded stylish young Vancouverites took place just behind Pat’s Pub, at a place called The Chapel.

Edo Van Breemen, lead singer and keyboardist for The Clips, spearheaded the musical plan for the night, and 3rd year Emily Carr student Sally Hutcheon looked after corralling the young artistic talents, filling the many rooms with well-hung eye candy — she called the whole shebang her “Vague Undertaking”. To find works that featured images as diverse as tree trunks painted on human flesh by an artist named Chloe, and nautically-themed re-workings by Ed Spence, Hutcheon called upon friends and classmates to exhibit recent works — drawing heavily on those who, according to Van Breemen, are “tentatively named ‘The Chair Factory Collective.’” This same group of kids is responsible for the steady movement, and nausea-inducing enthusiasm, to be found on the dancefloor at any given Clips show.

The frequency of Clips appearances around town, of late, and the omnipresence of the band’s spray-painted paper clip logo up and down streets are of high repute. One could be forgiven for thinking the band has an album to push, but such is not yet the case. ‘Music’s in the can,’ according to the band, and can be expected soon, but the live shows have garnered fans based on their own merit. Van Breemen chose two of his favourite Vancouver bands to share the Chapel bill, but decided it was only fair to give his own band the opening slot.

That opening slot meant the band played to a less-than-full room, and experienced a few sound glitches (well, those problems ended up plaguing all three bands – since when do bass speakers go on top?). However, the difficulties were transcended, and a solid set came together. The Clips managed to get a room full of awkward, not-yet-drunk bodies moving by feeding the crowd a series of keyboard-fueled meandering pop gems.

Following the crowd favorites may have been tough for Bend Sinister, but you would never have known it from watching the band play. Lead singer Dan Moxon, who I have never seen behind a keyboard before, is a powerhouse. Cliché as it may be, Bend Sinister made me feel, for those 45 minutes, as though I was at a stadium rock show. I have mocked Dan’s record collection in the past, but seeing the band live shed new light on how influences like Supertramp and Billy Joel shape the music of now.

By the time Panurge took the stage, people were drunk enough to take on Dancy Party, Round Three. Guitarist/vocalist John Schubert joked with me at the beginning of the night that they would be lucky if 12 people were still there by the night’s end. John’s worries were put to bed by those not yet ready to visit their own.

Most people managed to take in Bend Sinister and Panurge’s performances, and the art show which inspired the get-together in the first place. I left the building with a solid understanding of why people are so crazy about up-and-comers like The Clips, and how cool it is when young artists get together in an effort to support their own. Well done, youthful hopefuls! 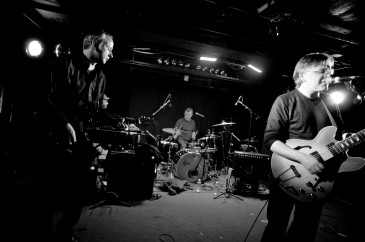