Cold Eye
As I stepped out of the Rickshaw into the cold drizzle on East Hastings, I was shaken to the bone: the night’s heroes, the Cave Singers had baffled all my expectations. The Seattle-based band—including former members of punk revivalists Murder City Devils and Pretty Girls Make Graves—played a remarkably bare and stripped down type of folk-rock. The show started with pleasant, if rather generic sounding garage rock, from locals, Sun Wizard. Nevertheless, they displayed an interesting versatility, finishing their set with a captivating layered jam of reverbed guitars, showing some great potential with their newer as-of-yet unreleased songs.

After a lengthy break, the Cave Singers’ three members unceremoniously walked up to their places on stage, immediately surprising me with the sheer minimalism of their set-up. As drummer Marty Lund started the unmistakable stomping beat, the only other instrumentation in play was Derek Fudesco’s hollow-body electric guitar and the maracas in frontman Pete Quirk’s hand as he slowly took rhythmical steps towards the audience. The band was in no hurry to unleash its riffs, instead giving time for the atmosphere to build, steadily brewing a captivating trance of a soundscape. At last the raucous main riff of “At the Cut” echoed through the Rickshaw’s concrete walled hall and it was immediately met with an ecstatic cheer from the audience that was engulfed by the stomping rhythm. Pete Quirk’s voice—shrill, throaty and yet bearing a striking soulfulness—was the perfect addition to the mix, which, together with its sincere post-gospel lyrics evoked an image of a disillusioned burned out man that might have once even been a preacher in a distant past long lost. The Singers followed with a few more powerful stomping numbers while keeping a great stage presence, especially with guitarist Fudesco taking the concept of seated guitar playing to its limits with his inspiring frantic moves. These men clearly enjoyed themselves immensely up on stage, both while performing and in between songs, sharing some amusing alcoholic breakfast stories as well.

As the band moved into a more mellow section of their set I was slightly disappointed at first, unwilling to come down from the trance that the powerful start of the show had thrown me into, yet the Cave Singers knew better. On the slower songs, Quirk’s remarkable voice was pushed to front and centre, delivering an overall raw and natural feel which was surprisingly well blended with the electronic waving of the looped synthesizer tying “Helen” together. During this part of the set, Quirk took a seat and grabbed a parlour style guitar which, with its light trebly sound, worked harmoniously with Fudesco’s deep and reverbed licks. My only complaint would be that some of their lighter songs seem to lack a sense of conclusiveness and occasionally come off as slightly undeveloped.

One of the night’s highlights was “Shrine,” a deep folk ballad built over a spell-bound djembe beat rising and falling through the glow of fantastic lights. As the set came to a end, the band returned to its more upbeat songs, closing with “Leap,” featuring quick finger-picked riffs, a rolling country beat and a great wide use of harmonica in the song’s most divine moments.

But there was no way these men could be done yet. They came back for a thundering encore, returning to the stage with the washboard-centered beat of one of their most powerful songs, “Dancing on our Graves.” The encore featured four songs, including some new exciting material and a great use of the melodica on the piercing “New Monuments.” As the band left the stage, visibly satisfied with themselves, I had no doubts that I made the best possible choice this Saturday night. 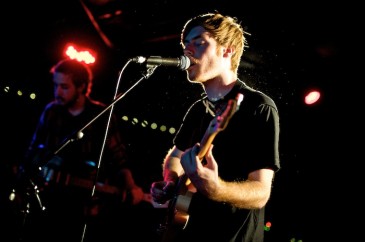