Back in the hazy days of summer ‘05, Vancouver style pioneer Brady Cranfield crashed his bike while riding home from work. As he flew through the air, he had the wherewithall to protect his beer-filled bag, but forgot to concern himself with his own personal well-being. Why should you care about this most treacherous of mishaps? Because it very nearly meant the end of Cranfield’s illustrious drumming career. In one fell swoop he cracked his elbows and broke his fans’ hearts, temporarily turning the Secret Three into the Secret Two-and-a-Half.

Also affected by the splintering of bone was The Book of Lists, a calculating rock four-piece fronted by Chris Frey [ex-Radio Berlin, ex-Destroyer], who depend on Cranfield to keep the beat. Guitarist Trevor Larson was so upset that he didn’t leave his mother’s basement for three weeks, living off Campbell’s chicken noodle soup and menthol cigarettes. Bassist Laura Piasta printed up shirts for the general public which read “Post rock won’t be the same without you, big guy!”, none of which were ever worn, as Cranfield’s arms mended quickly and enabled him to get back behind the kit.

And so I’m happy to announce that The Book of Lists is massively back on track. They’ve been playing songs from their EP Red Arrows and new songs they’ve invented at many a house of ill repute around town. Most recently they headlined a show at Richard’s on Richards with Pride Tiger and the Anemones, where their beer was drunk by freeloading journalists and their sound, a fuzzy but perfectly-planned throwback to bands you might not know (Felt, anyone?) was enjoyed by many a party-ready person. Here’s what I got out of the band that night:

DiSCORDER: Let’s talk about some highs and lows of
2005 for the Book of Lists.
Trevor Larson: Oh man! Don’t get us started! Let’s mention some lows…

Chris Frey: I’ll mention some personal lows. I was doing some social work earlier on in the year and had my life threatened a number of times, and so
I decided to get out of that practice. In order to fill the income void that that left in my life, I took every job I could get a hold of and worked seven
days a week making still no money for the entire summer. Our practice space got broken into, and Trevor and Laura’s guitars got stolen. More recently
Laura and I almost got killed in a high-speed car chase. We were riding our bicycles.

How does this all fit together? Someone decided to
chase you because…

Chris Frey: The police were chasing somebody and they happened to be boxing in the speeding vehicle right where we were riding our bicycles. We both got hit by cars. I don’t know if we should even be mentioning that… But let’s talk about some of the good moments.

Laura Piasta: Both of my sisters had babies.

Chris Frey: Our first EP came out, and that was exciting. Basically, we’ve almost got a new album ready to record. We’re recording in December at the Hive with Josh Wells and Colin Stewart.

Did you guys ever find your instruments again?
Trevor Larson: No.

Brady Cranfield: We also got evicted from that space, shortly after we got broken into.

Chris Frey: Add that to the lows.

Trevor Larson: They tried to break in a second time, but I was there, and I saw the guy, and he jumped the fence and got away. Laura, I’ve heard you have the skateboard connection.

Trevor Larson: You should see her Nokia commercial, it’s amazing!

Laura Piasta: I don’t know if there’s much to explain, but I’ve skateboarded for a long time.

Are you pro?
Laura Piasta: No.

Is that an aspiration?
Laura Piasta: I don’t think I could ever be good enough to be… But I’ve entered contests. It’s pretty easy to enter contests.

Chris Frey: She was in Slam City Jam. Didn’t you get, like, third place or something? Or was that a typo?

Laura Piasta: Seventh, the first time. But there was only like fifteen women in the contest.

Have any of your bands ever played Slam City
Jam?
Chris Frey: No! Nor the Warped Tour. I don’t know what we’re doing wrong.

Not even you, Brady?
Brady Cranfield: Are you kidding? Actually, you know what, somebody approached Video Tokyo, encouraging us to submit for one of those. Video Tokyo, being the band that it is, couldn’t bother to pull its shit together to do it. It would have been funny, I suppose….

Chris Frey: I remember Dan Bejar really wanted to get on the bill, but they turned him down.

Warped tour or SSJ?
Chris Frey: Both. He was, like, sending out applications madly.

Brady Cranfield: Because he’s so into skateboarding and skateboard culture.

How was your big UBC beginning-of-school hot
party ballroom show?
Trevor Larson: There was pot there?

Brady Cranfield: It was an all-ages show.

I said HOT. And I’m sure there was alcohol there,
Brady, come on.

Brady Cranfield: There were some pretty younglooking kids there.

Trevor Larson: We had enough alcohol, that’s for sure!

Chris Frey: It was definitely the strangest show we’ve ever played. I don’t think anybody had ever heard of us. People nodded their heads in time with the music and all that, but I think there was a lot of confusion because I think they wanted The Weakerthans.

You guys don’t do any cover tunes, eh?
Chris Frey: Not yet, but we’re thinking about it.

With four very diverse characters, are you going to
be able to pick one song, one band that is worth
covering?

Brady Cranfield: A medley. But that’s how we design our songs. Each chord and lick is a little icon of pop music references. There’s actually very little
originality in the way that we write our music. We have this graph system that we follow, and it’s alpha-numeric, but usually it works.

Laura Piasta: Sixpence None the Richer.

Laura Piasta: But it was an accident, subconscious…

Trevor Larson: No way. I was really trying to put that in there.

Laura Piasta: We should do some Freudian analysis of our songs.

You should pay someone to do that for you. Trevor
and Laura, can you two help me out and explain
T.A.L.A. Band, which you used to play in? The name
is always mentioned in things, but there’s no info.
Did this band actually exist?
Trevor Larson: Oh yeah, we played tons of shows, like twelve.

Laura Piasta: We played like every week. We recorded four songs at The Hive, and Trevor and I were just listening to that the other night.

Trevor Larson: I don’t think so.

Trevor Larson: We used to have this fog tent that we’d set up with PVC sheeting.

Brady Cranfield: It was a hot-box tent.

Trevor Larson: No no no…We put a smoke machine and a strobe light inside it, and during our first song the lead singer would cut open the tent and
smoke would spill out over the crowd. Of course we were just all over the place. It was not really a tight band at all.

So where’s the Book of Lists’ gimmick?
Brady Cranfield: Trevor is our gimmick.

Trevor Larson: But it made people too uptight to party. Too uptight!

Do people party when you play?
Brady Cranfield: We don’t notice, because we’re too uptight.

So you’re always just looking at the wall at the back
of the room?
Laura Piasta: We’re looking into our inner mind’s eye.

Chris Frey: People seem to pay attention at least. I’m not sure if there are enough people who know our songs enough to really loosen up around them.
They’re probably still trying to digest the first songs we’ve written. We’re only about a year old.

Brady Cranfield: But in all sincerity, we’re a very new band still, and we haven’t played a whole lot, because we’ve all been busy with school and
other obligations. Once the new year begins, I think all that will change and we’ll play around more than we have in the past and everybody will be happier. 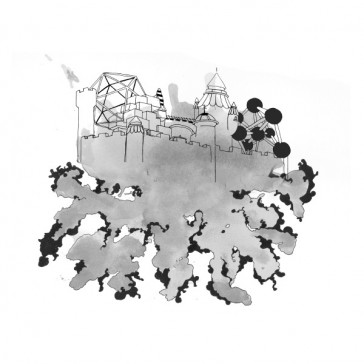