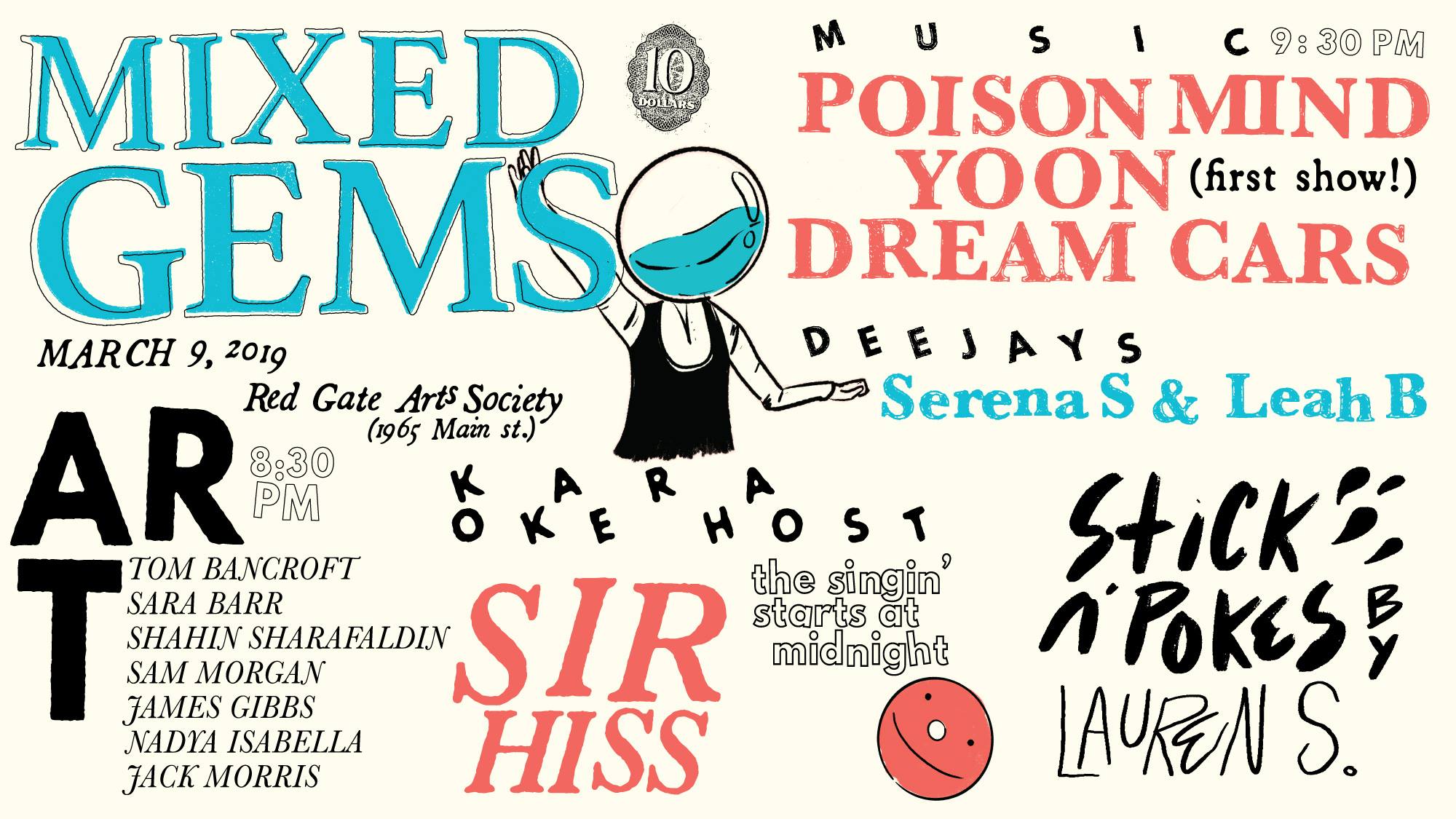 When I first looked at the Facebook event for Mixed Gems, and discovered that it went all the way from 8:30 PM to 1:00 AM, in addition to being a 45-minute bus ride away, I was definitely a bit apprehensive. However, after having gone, I’d say it was certainly well worth the trip out.

While it looked fairly unassuming from the front, Red Gate immediately felt  larger as soon as I stepped inside and took a look around.

The first room on the right, featuring stark white walls and exposed tube lights, was being used as a gallery to display the various visual artists’ works that night. Across the walls were an array of photographs, paintings, and illustrations. One work that immediately stood out to me was Shahin Sharafaldin’s beautifully done portrait of a young person of colour. I especially admired how well the artist utilized colour: the tones on the subject’s flowing outfit perfectly mimicking some of the colours in the surrounding scenery.

I was also fond of the collection of double-exposure 35mm film photos taken by James Gibbs (who I later found out is also the lead vocalist of the band Yoon, who performed later in the night), depicting a variety of island scenes as well as photographer Sara Baar’s bright, vibrant and summery collection of photos.

The gallery also displayed art across various media by artists Tom Bancroft, Sam Morgan, Nadya Isabella, and Jack Morris. Also in the room, amidst the art show, was a steady line around a table where a stick and poke artist was doing both flash and custom tattoos throughout the evening.

As interesting as the art on the walls was I often found my eyes being drawn away to the attendees of the event. The crowd, with plenty of DIY bangs, rolled-up beanies, dad shoes, and fur coats, was almost intimidatingly fashionable.

Around 10:15 PM, a crowd began to form near the stage in the main room of the venue as the first of three bands performing that night, Yoon, was setting up. As a disco ball cast purple and blue light across the room, Yoon proceeded to rock out with a series of grunge and garage rock tracks, complete with many sick electric guitar riffs. The four-piece Poison Mind took the stage for the next set, playing classic rock tracks for the growing audience. I especially loved how into the performance the band’s singers got – they really seemed like they were having a great time up there.

The final performance of the night came from the band Dream Cars, who delivered a collection of nostalgic, new-wave inspired ballads, featuring powerful vocals from the bands’ frontperson, Phil. Throughout the night DJ’s Serena S and Leah B spun a variety of records between the sets, keeping the vibes light and fun.

One aspect of Mixed Gems I especially liked was how free-flowing the event felt. People were continuously walking back and forth, checking out the various rooms of the venue. Despite the abundance and variety of art on display, everyone seemed casual, relaxed, and having a good time. I know I did.