Sometime in 2002, one Forbes Latimer sold his boat and took on a former butcher shop at 195 East 26th. On March 24 of that year, it opened its doors as the Butchershop Floor and became home to a collective of some twenty artists, including Ehren Salazar, who now runs the space as the Little Mountain Gallery.

“It had a good run, we had great shows, but it just got exhausted,” Salazar said of those days. “[Myself] and another member from the Butchershop, Alex Cieslik, [renamed it and] kept it going… I just felt the need to keep the space alive, because there [were] so few spaces like it in the city.”

Fast forward a decade. Little Mountain Gallery is now a licensed performance venue run by the newly founded non-profit Little Mountain Community Arts Association; a celebration was in order. But that Saturday, the Gallery remained curiously empty nearly an hour after door time.

A modest crowd turned up eventually and Salazar opened up the show by strumming out a few songs (including an impromptu paean to Roberto Luongo), taking requests, and relating (perhaps jokingly) his “theories about the future.”

“Robots [will be] in the audience,” Salazar quipped. “Concerts will consist of staring; the music will just play in your head.” Amid the running joke that he’d left to “smoke outside with teenagers” during Salazar’s acoustic officiating, local fixture/friend-to-all Chris-a-riffic came in and started the first set of the show by telling the story of his first gig there with They Shoot Horses, Don’t They? It was during the 2004 Stanley Cup playoffs, and the bands that day played between intermissions (incidentally, Vancouver won that night).

Then he sweatily pounded out his self-described “gospel music:” songs about friends being drawn to Montreal’s charm, songs about Vancouver’s superiority/inferiority complex, songs about his neighbours, songs about his bandmates, and songs about drives to the Okanagan in his younger days. The crowd was polite—modest in more ways than one— but sent him off with raucous applause.

Next up was “lo-fi Canadian feminist labour surf-pop” outfit Loose Tights, with Caitlin Gilroy (also of Unreliable Narrator and Brave Irene) and sisters Beshélle and Nicole Caron. Drinking water out of pickle jars and singing about female empowerment and reproductive labour, they bashed out a ramshackle set on their rattling guitars straight out of Olympia; not only with their ‘90s jangle and grit, but also with their theory-heavy lyrics.

Following Loose Tights was the inimitable Adrian Teacher of Apollo Ghosts. Chewing a used piece of gum, he told a story of his first show at the Butcher Shop; it was Ladyhawk’s first show too, and it was shut down by the police. Tonight was a somewhat more sedate affair, especially for the ebullient Teacher, but it was essentially as much of an Apollo Ghosts show as an actual Apollo Ghosts show, complete with lively sing-alongs, good-natured quips.

Post-folksters Slight Birching, consisting tonight of Sean Ramsay and Adrienne Labelle, were next (the last scheduled performer, Hannah Epperson, wasn’t able to make it). They seemed reluctant at first; Ramsay, vibrating with painful “awareness,” said he was hit by a car. But Ramsay strummed on through the pain with a broken thumbnail, Labelle’s fiddle at his back. Even as he claimed to be on the verge of a “meltdown” toward the end of their set, they detoured into some Tragically Hip covers before wrapping up.

Finally, Salazar returned with his guitar and ended the night, first on a humorous note, obliging someone’s request for “Take Me To The Ball Game,” then on a sombre note, with Beck‘s “I Have Seen The Land Beyond.” It was a fitting close to the night, mirroring Little Mountain’s decade-long history of making the most of less-than-ideal circumstances—or at least getting by. And what does the future hold?

“Who knows… Little Mountain might be a big ol’ condo. Maybe we’ll be out in Surrey somewhere. Surrey’s where it’s at. There’s a lot going out there,” said Salazar, half-joking.

“Hopefully, this place will still be around,” he added. “It’s been a love-hate [relationship]… There’ll be a need for more people to be involved here and keep it running.” 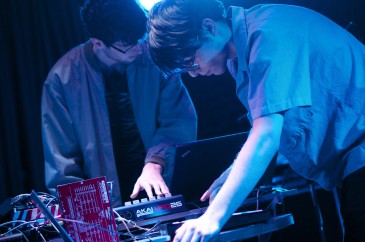