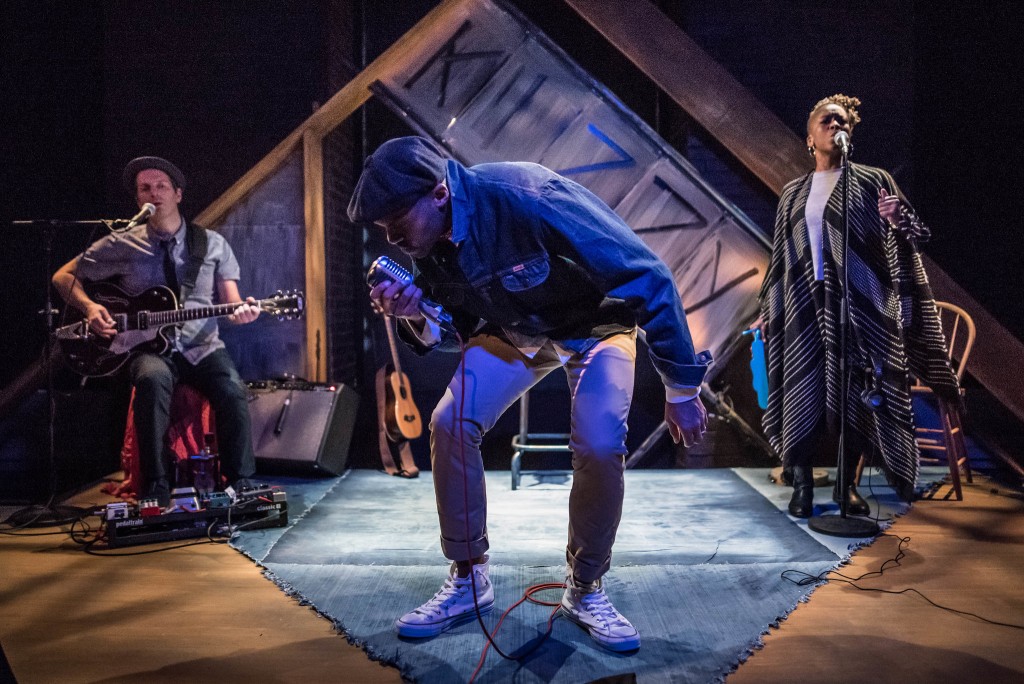 From his roots as a gospel singer in Juno-nominated The Sojourners, Detroit native Khari Wendell McClelland makes his debut in theatre with his latest project: Freedom Singer. This documentary theatre piece centers around Khari’s great-great-great grandmother, Kizzy, who travelled through the Underground Railroad from Detroit to escape slavery in Canada.

Through visiting significant Afro-Canadian historical sites from BC to Nova Scotia and interviewing descendants of those who used the Underground Railroad, Khari cut and pasted these pieces of dialogue together with 1850s freedom songs and contemporary music to this unique piece of verbatim theatre.

History is never so straightforward though, and as Khari puts it, “Some of the overarching mythologies around the flight of Black people into Canada frames it as something that was totally positive and redemptive, but slavery in the Canadian context is nuanced and a much more complex story than what people often share. People don’t really know that slavery existed in Canada, or that they abolished it only 30 years before folks in the United States did. So the piece really attempts to complicate both narratives.”

“When we look at these epics of history, we understand that there were people who were enslaved and that it was a horrible thing, but often there’s something that’s very distancing about it. It’s very impersonal in the way that we just think, ‘Oh it’s slaves!’ But we don’t actually go, ‘Oh yeah, there was this specific person that had their own dreams, a relationship to their family and the neighbourhood they were born to, particular skills and capacities, and that they were just like any other people that we know.”

After surviving almost a year in the Trump-era, it seems fitting that the play brings a special significance by touching on ideas of safe harbour for those who are fleeing from oppression, bringing up the question of immigration and who should be allowed in the country. With respect to the broader political context in relationship to the play, Khari says, “My grandmother Kizzy was fleeing a place that was harsh and tyrannical. So I think that especially in the case of refugees fleeing oppression, we should really be considering how we’re going to help these people. If those are foundational principles of how we consider ourselves to be “Canadian”, what does it mean for us in this time now?”

Kizzy and many other fleeing slaves’ stories were ones of hope and perseverance, their experiences characterized through song. When asked which artists would characterize lives of communities of colour today, Khari cited Kendrick Lamar, Shabazz Palaces and the Black Constellation Collective as artists who are able to reflect challenging realities and give voice to those who are less heard.

You might be asking, what’s next for this singer-songwriter turned play creator? Well, we can be expecting a Freedom Singer record come February 2018. But as far as his music goes, Khari has divulged that he recently bought a synthesizer and plans to explore a more futuristic sound, compared to his original, organic instrumentals.

You can catch Freedom Singer from now until October 18, 2017 on the Goldcorp Stage at the BMO Theatre Centre (162 West 1st Ave). Tickets can be found here.