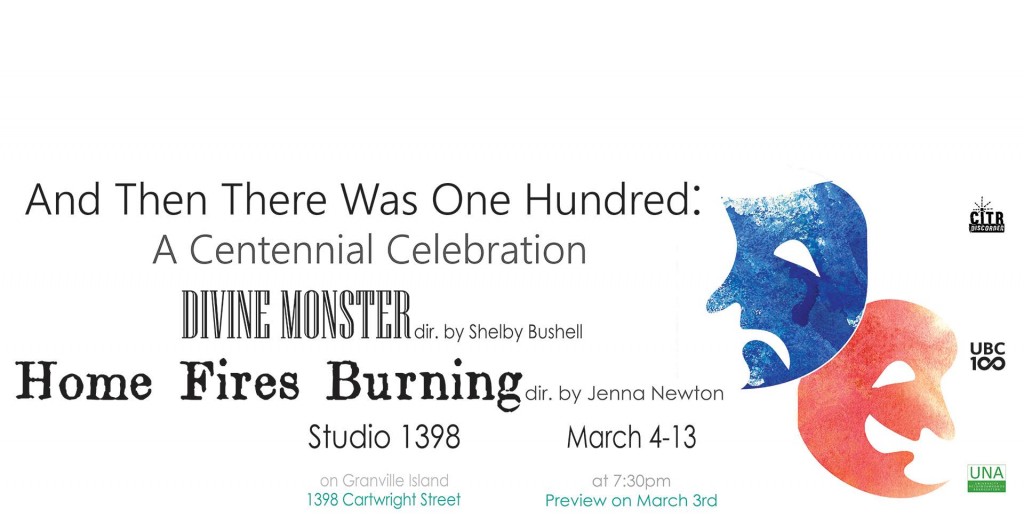 This year The UBC Player’s Club is putting on a two-show Centennial Celebration which begins tomorrow at Studio 1398.

There are two shows, both written by UBC alumni and are directed by Jenna Newton and Shelby Bushell.

“”Home Fires Burning” by Heidi Elric, directed by Jenna Newton, is a story of not only the UBC Players Club’s history, but Canada’s own as it came of age beneath the British Empire,” says playwright Heidi Elric. “It is a wartime piece about family and grief, but more than any of that, it is a tribute to Charles Duncan, one of the founding members of the UBC Player’s Club, a young student, artist, and human being who never came back from war.

“Divine Monster” by Elena Kaufman, directed by Shelby Bushell, is a dark comedy that questions our contemporary ideas of fame, stardom and adoration. The exchange between a UBC student backpacker and the greatest actress of the 19th century calls into question whether public fame and private happiness can ever be balanced.”

The preview show is tomorrow at 7:30 PM and is by donation.

Tickets are $15 for general admission and are $10 for students and seniors. As well, group discount rates are available.