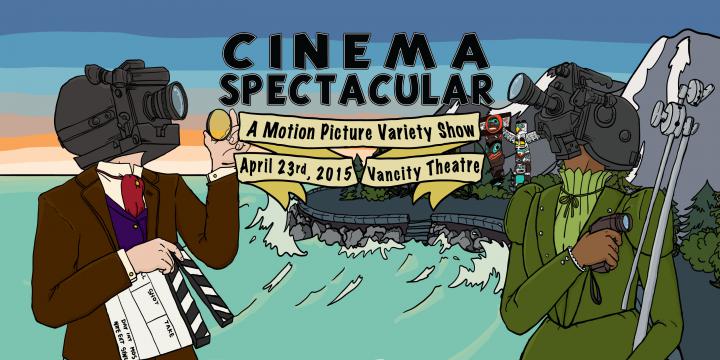 Vancouver’s second annual “Cinema Spectacular” was held on April 23rd, 2015. Reporter Dannielle Piper reviewed the event and several of its films for the Arts Report.

Cinema Spectacular features several little-known films from across Canada. These films span a variety of themes broaching topics of religion, gender identity, friendship, motherhood and love. Although these films and their respective filmmakers are remarkable, many only garner a handful of publicity. As a result, Cinema Spectacular functions as an opportunity for many low-to-no-budget filmmakers to showcase their work and receive the recognition that they deserve.

One standout film of the night was “The Match” directed by Kurt Spenrath. “The Match” is a hilarious, yet touching, 15-minute documentary about two wrestlers in the Prairie Wrestling Alliance who battle it out for the title and the belt. The film explores their relationship with their fans and how their profession affects their family life. The film is noteworthy for its honest portrayal of the sport as well as the people who partake in it. Moreover, the film emphasizes a strong sense of brotherhood between the characters despite the rivalry portrayed in the ring.

“Masculins”, another prominent film featured at Cinema Spectacular, dealt with the deconstruction of gender binaries and how different people embody masculine identities. Other noteworthy films from Cinema Spectacular include “We Three Heathens”, “Shadowbox”, “Son in the Barbershop” and “Short End”.  An interview with Laurel K. Brown and Alexandra Caulfield, the Director and Festival Coordinator for Cinema Spectacular, provided insight into the hard work and preparation that went into choosing these films and executing this spectacular event.

1. This is only your second year. How did you come up with the idea for Cinema Spectacular? How long did it take for your idea and vision to come to life?

LAUREL: Cinema Spectacular came to be because I felt there were too few places for low-budget Canadian filmmakers, like myself, to exhibit their work on a non-competitive platform. Producing my first independent short after film school was a new experience, and finding a reasonable way to exhibit it – now that I couldn’t celebrate it at a student screening – was difficult and the opportunities were few.

ALEXANDRA: I only joined up with Laurel on Cinema Spectacular this year, but I know that this festival hasn’t been a ‘years in the making’ type endeavour. Laurel saw a hole in our local film scene and decided to fill it, almost immediately. There wasn’t any use in waiting, people are making work now, so why not show it now.

2. What are some of the common obstacles of coordinating an event like this?

LAUREL: I would say the main obstacle is getting the word out, getting people in seats. It’s a definite learning process – and I have learned so much this and last year about what more I need to do to engage new audiences to come check us out. Having a festival coordinator (Alexandra Caulfield) certainly helped this year in making the event bigger and better.

ALEXANDRA: We have had such a warm response from all of our community partners, filmmakers, and attendees. Everyone who we talk to about the event seems genuinely excited about it. As Laurel said, translating awareness of an event into attendance is a big challenge that faces a lot of locally produced events in Vancouver.

3. How did you choose which films to include in the festival? What criteria did you use and what was your process?

LAUREL: Our festival’s guidelines this year included that the country of origin must be Canada, that the project must be under 25 minutes, and the budget must be under $20 000. We had about 150 films that came in with this criteria. What I wanted most, above a series of the best made films, was a program that went well together – so the films were chosen side-by-side.

ALEXANDRA: Once the final films were chosen, a really important part of programming is the screening order, having variation in the length and tone of adjacent films ensures that the audience is able to stay actively engaged with what they are watching. Especially at this stage, where Cinema Spectacular is a one- night-only variety program it was important for us to program films that represent a diversity of genres including experimental films, animation, and documentary.

4. How does this event facilitate recognition and productive networking between others in the industry?

LAUREL: Our event puts the filmmakers ahead of the films. We want people to get to know these artists – they are featured prominently online as well as in our programs for the event. Having these names accessible let’s people know who’s out there making movies, whether it’s in their own city or way over on the East Coast. Our Q+A this year was successful in bringing our BC filmmakers together and chatting about where our projects came from.

ALEXANDRA: There is a lot of virtue for filmmakers in being a part of an organized screening at a recognized venue. Our after-viewing reception creates an organic space for filmmakers to connect with each other.

5. What are some of things that can be done to engage low-to-no-budget directors more effectively so that they can showcase their work and gain more recognition?

LAUREL: As a low-budget director or producer, getting the project out there can be challenging. New platforms like FilmFreeway have made it very easy to find and submit to festivals without too much hassle. Letting them know you want to help is important, and I find making yourself accessible as a filmmaker (and a festival director) very important as well.

6. What are some of the challenges associated with finding and engaging low-budget film makers?

LAUREL: Finding low-budget filmmakers isn’t difficult. Everyone, especially in Vancouver, seems to have a project (or two or three) that is kept on the backburner. Engaging can be hard – but not for lack of trying on their part. Making movies costs money and for low-budget filmmakers, it’s a very opportunistic type of work, there are a lot of limiting factors that can make or break a production, especially when you have a very low budget. It’s a matter of staying in touch, helping them out, and keeping interested in their projects.

ALEXANDRA: I think the real challenge here is in engaging a media-saturated public with up and coming independent filmmakers. I just read a study about how the average North American spends 5.5 hours a day watching some kind of video (including traditional television, streaming services, and other online videos). With so much content surrounding us, it can be difficult to convince people to leave the comfort of their homes to come see films by filmmakers they’ve never heard of, that don’t have cultural cache, and to be honest aren’t guaranteed to be any good. We’re asking people to take a chance and spend a bit of their hard earned cash on an unknown product.

7. Why should people attend this event? What are some of the reasons that make it worth attending?

ALEXANDRA: Cinema Spectacular is a place to see films that you can’t see anywhere else. It is a way to support Canadian filmmakers, and have fun doing it. We also have wonderful community partners who donated some over-the-top raffle prizes if anyone needs a little extra incentive.

LAUREL: Last year, we did not have open submissions for the festival. The program was made up of projects I knew had been ongoing in my circles of peers. This meant there wasn’t a preconceived flow or theme to the evening, and we had a bit of everything. This year we still have a little bit of everything, but it goes together – one leads into the next. I was pleased to be able to include some animated pieces from Montreal this year, and more documentary work.

9. What are some of your favourite films this year? Why?

LAUREL: Having been so close to the selecting of these films – I honestly can say that I love all of them. Each of them has something that is unique among all the others.

ALEXANDRA: I can’t pick a favourite, but I did cackle the first time I saw Les Grebiches, and still have the song from Lumberjacked stuck in my head.

10. What’s your biggest wish for Cinema Spectacular? Where do you see it in five years?

LAUREL: I want Cinema Spectacular to help filmmakers. In five years I would love to see a feature film selection addition, and starting on a travelling version of our festival that can go to other provinces with a main line-up of films as well as a province-specific program. We have big plans for the future – and we hope we can ride our momentum from this year’s success into our third festival year.