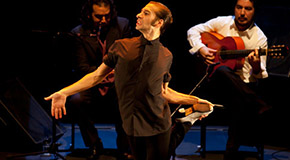 Isreal Galvan is reputed to be one of the most accomplished and innovative flamenco dancers in the world, known for infusing traditional flamenco with contemporary techniques. He appeared at the Playhouse on March 22 & 23, 2014 as part of the Vancouver International Dance Festival.

One concept central to flamenco is El Duende, an earth spirit that the performer calls into being through the dance. They struggle together, evoking a power that is experienced by the audience as “almost unendurable.” As Galvan stepped into a square of light at the centre of the stage he bowed, as if to an invisible force, welcoming the spirit of Duende into the circle.

No question, Isreal Galvan was utterly amazing. Tall and lithe, he executed lightning fast rhythms which he beat out on the floor with his shoes. With his hands he created more of the complex rhythms–on his legs, chest, head, and even on his teeth. His unique way of incorporating contemporary moves with traditional flamenco was not to my particular taste, as they didn’t seem to create synergistic effect—the two together were not greater than the sum of their parts. He moved from fast footwork of flamenco to still postures that were reminiscent of the Madonna inspired dance craze “Vogueing.” Ultimately,the slowing down created by the contemporary postures prevented the frenzied energy of El Duende from entering the performance.

It was actually the cantor (singer) David Lagos, whose brought El Duende to the stage. Robust, eerie, & earthy, his traditional singing drew you out of yourself and into new landscapes . The interplay between the cantor, the spanish guitar and Galvan was beautifully arranged, with each getting a chance to shine on their own, and then work together as an ensemble. The group demonstrated world class technique, and an irreverent sense of humour that completely won over the crowd. At the end, the audience burst out of their seats for a standing ovation. It was great fortune for everyone to have the opportunity to see the incredible Isreal Galvan & his musicians. There are more performances happening as part of Vancouver International Dance Festival on March 27-29th. 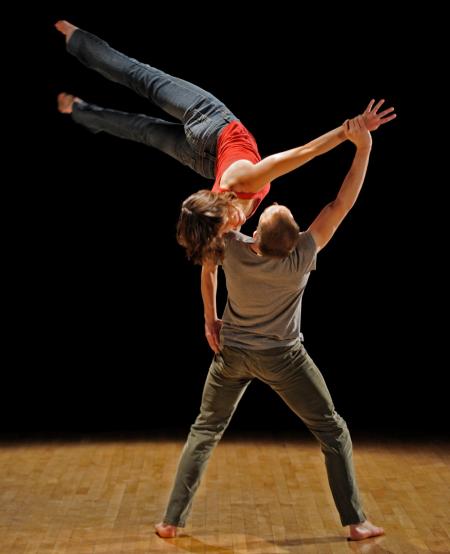