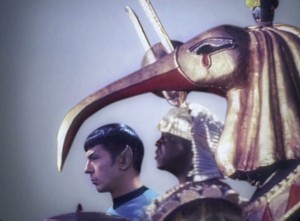 Astro Black is an ongoing video cycle informed by cultural theories of Afrofuturism. Taking the cosmic jazz musician Sun Ra as a point of departure, this speculative history seeks to draw out the nexus of science fiction and social politics in Black Atlantic culture. For the first time in North America, Episodes -1 to 2 will be exhibited together as a 4-channel video installation.

Soda_Jerk is an Australian two-person art collective that works with found material to trouble formulations of cultural history. Taking the form of video installations, cutup texts and lecture performances, their archival practice merges the zones of research, documentary and speculative fiction.

The Arts Report conducted this brief Q&A about their origins:

You two are sisters. What got this family affair started? What is it about working together that fires up your creativity?

We don’t have much in the way of a of childhood origin story, just a lot of playing around with tapes + VCR players. Oh and a dodgy remake of the film Heathers we directed with our friends and the family video camera. What suits us about working collectively is that it disrupts the closed economy of production and enables a space of improvisation and uncertainty. And we feel ever-grateful to be able to share the blues, elation, concepts and beers.

Define Afrofuturism in your own words.

We see Afrofuturism as a form of social politics that emerges through the intersection of race and outerspace. It’s a way of hacking the official record of history by constructing counter-mythologies of the present that open new possibilities for the future. Like Sun Ra’s claim that he was born on Saturn, or George Clinton dressed like a space pimp and riding a UFO on the cover of the Mothership Connection LP. Those guys are not waiting for NASA to invite them to join the space program, they’re already travelling the spaceways through their music.

What’s coming up next for you?

The video project we’re working on at the moment is a sci-fi noir about William S. Burrough’s and the radical politics of the cut.

If you were a superhero who would you be and why?

Bombastic CGI film franchises have definitely sucked up much of our initial enthusiasm for comic book heroes. Closest thing to a superhero that we’re into is probably the armoured warriors of Ramellzee. In his treatise ‘Gothic Futurism Assassin Knowledges of the Remanipulated Square Point’s one to 720° to 1440°’ he outlines how the secret powers of encryption can be enlisted in the battle to remake reality.