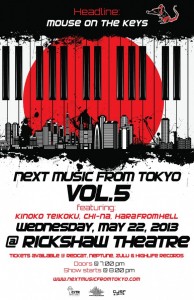 Next Music From Tokyo is back after sold out shows at the Biltmore cabaret and the Waldorf. The event will be on Wednesday May 22nd at The Rickshaw Theatre 254 Hastings. Advance tickets only 10 dollars at Red Cat, Zulu, Neptoon, Highlife records or on line www.Ticketweb.ca

The bands always put an excellent and unique show. This edition we are super excited to see Mouse on the Keys and shoegaze band Kinoko Teikoku. Chi-na is coming back by popular demand. Harafromhell which is one of the newest bands in the Japanese scene

Next Music from Tokyo is a non-profit, tour transporting the audience on a virtual trip to a gig in Tokyo’s underground live house scene. Their goal is to curate the best concert the audience has ever seen by featuring Japanese bands that play with a degree of skill, creativity.

“Next Music from Tokyo may not succeed in becoming the best show you see your entire life but we’ll settle for somewhere in the top 3 while introducing Canadians to the great music that is overflowing from all parts of Japan, especially Tokyo.“ 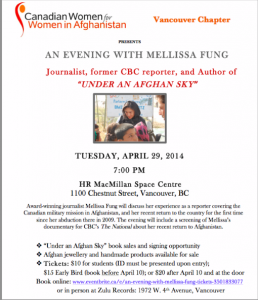