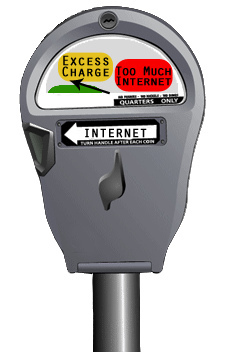 Internet usage may soon be getting more expensive for you. CiTR supports the OpenMedia.ca campaign to stop the meter.

Internet Service Providers (ISPs) are about to put a pay meter on your Internet use.

This means we’re looking at a future where ISPs will charge per byte, the way they do with smart phones. If we allow this to happen Canadians will have no choice but to pay MUCH more for less Internet. Big Telecom companies are obviously trying to gouge consumers, control the Internet market, and ensure that consumers continue to subscribe to their television services.

These Big Telecom companies are forcing small competing ISPs to adopt the same pricing scheme, so that we have no choice but to pay these punitive fees.

This will crush innovative services, Canada’s digital competitiveness, social progress, and your wallet.

UPDATE: The NDP, the Liberals, Green Party and Conservative Party have all now come out AGAINST Internet metering.
Now for the most important phase of our campaign – the CRTC has been asked to reconsider their billing rules. So far the CRTC is digging in its heels and reacting to public pressure with disdain.

We urgently need to send a clear message to CRTC Chair Konrad von Finckenstein that we demand access to an unmetered internet. Enough is enough.