While the G20 protest began peacefully on Saturday morning, smaller groups within the protest did break off to take part in acts of vandalism. Unfortunately, these actions by a few distracted from the largely peaceful protests of many. The mainstream media largely categorized all of the day’s protest activities as “violent,” although there has been relatively little critique of the arbitrary arrests and attacks on peaceful protesters and journalists.

CiTR News has been in contact with activists who have observed some alarming trends in tactics used by Toronto Police and the Integrated Security Unit. Video journalist Brandon Jourdan posted this footage on the Toronto Media Co-op’s website and YouTube.

An estimated 100-150 peaceful protesters have been arrested in front of the Novotel Hotel, as police trapped them and did not give them the option to leave the scene. Mohawk activist Ben Powless describes the scene in this recently posted interview on the Toronto Media Co-op’s website, which can be found here. Note: This interview is not related to the above footage. These are separate incidents.

CiTR News is committed to covering stories that matter to you – and reporting from a fully alternative, non-corporate perspective. Please let us know what you think we should be covering for the upcoming Monday edition of News 101. Are there certain people you think we should interview on News 101? Email us at news@citr.ca or tweet us at @CiTRnews. 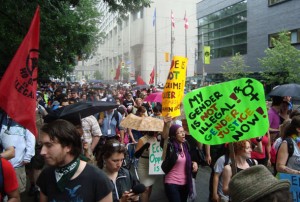 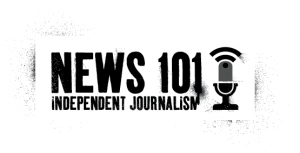