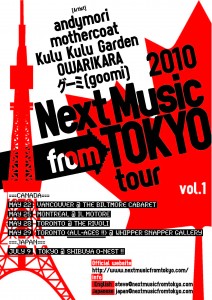 Japanese cuisine, animation (“anime”), cinema and video games are aspects of Japanese culture that have successfully crossed over to North America. However, Japanese music despite its incredible diversity, creativity and exotic appeal has had very little exposure in Canada.

On May 22, the Biltmore Cabaret will host five bands from Tokyo, allowing you to sample the burgeoning indie/underground scene from across the globe. Touring bands include:

andymori-hailed by iTunes Japan as a “Sound of 2010” breakthrough artist, this humble trio of musicians play power-pop/punk akin to the Arctic Monkeys that combines timeless melodies with unbridled energy. Having only formed in 2007, andymori have already performed at every major rock festival in Japan.

mothercoat – experimental rock band with an incredibly quirky sense of humor and lushly complex orchestration. mothercoat have visited the US twice and showcased at SXSW in 2007.

goomi – “underground pop” with sublimely harmonized male-female vocals. Though the trio of musicians primarily use guitar, bass and drums, they also incorporate violin, alternate percussion instruments and the glockenspiel to add diversity to their unique sound.