The guy sitting next to me on the bus ride to Shout Back! — an anti-capitalist, DIY, feminist, punk festival — was falling all over me, boozily asking if I had ever been to the nude beach and insisting that I should be a little open-minded and accompany him down there at that very moment. Naturally I took the close-minded bitch approach of sticking to my pre-existing plans, but I do have to hand it to the guy: he really got me in the mood for an anti-oppressive dance party.

When I arrived at Rainbow Connection, it was a bit like going through a portal: the crowd was one of the most diverse I had ever seen at a punk show, and the festival organizers had carefully arranged informative zines about appropriation, political patches and buttons, and brightly coloured, declarative signs stating the terms of this temporary space: “no pipelines,” “no macho bullshit,” “riots not diets,” and so on. Throughout the night, a member of the festival’s “safer spaces team” would take over the mic and inform attendees of the festival’s sophisticated harm-reduction program, the likes of which I have only ever seen at raves.

I arrived midway through the set of East Vancouver-based Felonious Parker, who alternately rapped and sang over eclectically selected pop hooks. (Did I hear some dubstep in there?) I couldn’t help but be impressed by the vulnerability of this solo act; it takes gumption to enthusiastically belt out karaoke-diva vocals with nothing between you and the audience but a very minimal setup.

Next up were Fakes, a noisy punk band from Montreal. Their pared-down, rock ‘n’ roll instrumental style allowed the vocalist to take centre stage with Penis Envy-inspired squeals, chants, and growls. This was followed by my favourite set of the night, Violent Vickie, a San Francisco-based multimedia electro-punk DJ.

Violent Vickie curated a set of extremely danceable electro-pop with vocal hooks that hit a perfect combination of sexy and intelligent. This was the only act of the night that decidedly favoured melodic singing over something more aggressive. The vocals were reminiscent of Deee-Lite, and somehow Violent Vickie made that feat look easy as she danced around in a sultry gas attendant uniform with video projections spilling all over the stage. Despite this obvious opportunity for a saucy dance party, nobody was dancing save for two girls at the front. Here’s to them!

Local punk band Bushtit were clearly an audience favourite, with multiple vocalists shouting and singing at once over surf-y riffs. Next up were Oakland-based band No Babies, who were much heavier, faster, and artier than the earlier performers. Blasts of screaming and mayhem were juxtaposed against quiet interludes carried only by a bass drum heartbeat and soft singing.

By the final act of the night, the venue had quieted down and a festival organizer made an announcement that everyone should “Go home and go to sleep” after the final band. Locals Channels 3 & 4 didn’t seem to mind, and they kept the party going with dark, minimal synth tunes reminiscent of the boss level on your favourite video game accompanied by frantic, noisy drumming. I went home satisfied with my choice to skip the nude beach. 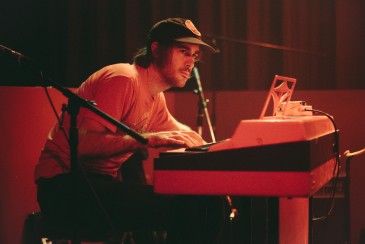