Even though Black Summer is the Astoria’s new monthly goth night, opener Zoo was the only group on the bill that brought out that dark and eerie edge. The solo act played reverb-drenched tunes with vocals so shrouded in echo as to be nearly inaudible. Ashlee Luk’s candy apple red guitar, meanwhile, sounded like it was set up in a cavernous cathedral as it played along to pre-recorded tracks. Unfortunately, the overall effect of the one-person performance was hardly organic. Abrupt song starts and out-of-sync finishes mechanically broke up each song, suggesting Zoo might have done better with a backing band instead of her loop pedal.

The New Values played a faster and far more confident performance then when I had seen them at Music Waste, where a sound technician fiasco left everything sounding terrible. Their songs slid under the two minute mark, but still gave guitarist Adam Sabla and bassist Hayz Fisher plenty of chances to trade off vocal duties. This is a band with plenty of energy to burn. Even if the crowd was stoic in their enthusiasm, the dual frontmen never missed a chance to jump around to their manic beats.

Although I’d seen Cowards before, their set for Black Summer still blew me away with its brilliant intensity. Burly vocalist Keith Wecker billowed around, taking giant gulps of beer between bursts of lyrics he hurled outwards to the audience like the angry words of God. The drunken preacher was joined by a noisy and thoroughly loud ensemble. Taking obvious cues from noise bands like Killing Joke and the Jesus Lizard, Cowards provided a steady, shuddering close to the evening. While they were a little rough around the edges, maybe that’s what made them so much fun to watch. 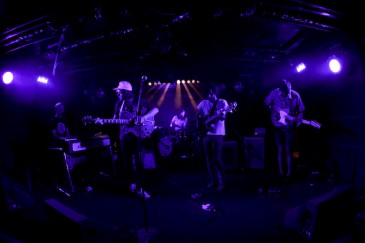